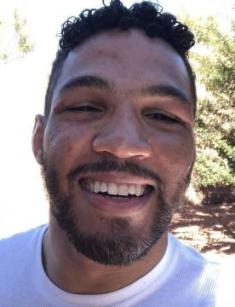 In the early 2010s, only loyal MMA fans, who carefully followed the appearance of new stars in this sport, knew about Kevin Lee. Nowadays, he is an outstanding athlete on the list of the best mixed martial artists, as evidenced by his fights in the ring with such recognized stars as Tony Ferguson and Michael Chiesa.

Kevin Jesse Lee, Jr. is an American athlete who was born in Michigan in early September 1992. He spent his early childhood in the second largest city of the state, Grand Rapids, but Kevin grew up in impoverished areas of Detroit, where drug trafficking flourished. So, in the evening, a few people dared walk along the streets.

The life of the future UFC star has been good thanks to the right priorities that Kevin Jesse Lee chose in his youth.

Kevin’s weight does not exceed 154.32 lbs. (70 kg) with a height of 5.74 ft. (175 cm). The reach of his hands is 77 in (196 cm). The top lightweight MMA fighter became fond of MMA thanks to Georges St-Pierre and B.J. Penn, whom fans call the best athletes in the welterweight and lightweight divisions. Lee considers Floyd Mayweather Jr. to be his idol. Kevin adopted the clothing style of the legendary boxer, preferring colorful shirts and elaborate glasses.

Lee made his professional debut in the spring of 2012. Then Kevin defeated the opponent via unanimous decision. He continued to hone his chops and improve his skills in little-known promotions in the USA and Canada.

In November 2013, the native of Michigan won the TWC Lightweight Championship, which attracted the attention of UFC, the world's largest promotion company. In the winter of 2014, the professional made his UFC debut, facing a prominent rival, Al Iaquinta. Lee was defeated, but he did not give up immediately, losing after the third round.

The first failure in his career forced him to recollect the strength to make a breakthrough and do his best at training. Soon his efforts turned into triumph because Lee won four consecutive bouts. In October 2017, Kevin Lee could fight for the interim UFC lightweight champion title, because the current champion, Conor McGregor, did not defend the champion belt for a long time. Lee's rival was Tony Ferguson.

The bout of two compatriots ended in Kevin’s defeat. Tony fought desperately with the worthy opponent and managed to break the resistance in the third round via triangle choke.

In 2018, the MMA professional lightweight champion lost to Al Iaquinta for the second time. Khabib Nurmagomedov spoke about the event, advising Lee to "stay humble" because "humility is the key to victory." In turn, Kevin replied on Instagram:

“I beat racism, the system, poverty, and everybody that wanna see me lose for no reason. Fuck being humble.”

In the spring of 2018, the American athlete faced Brazilian Edson Barboza. Their grueling battle lasted five rounds with varying success. In the third round, Kevin could barely stand after a powerful blow to the head but managed to continue the fight. In the final five-minute round, Barboza got severe injuries and stopped the battle at the insistence of the doctor. So, Lee won by TKO.

Kevin Lee mainly shares photos of recent fights with a large number of subscribers on his verified Instagram page. But the source also has Kevin’s childhood pictures. The fighter has an account on Twitter, but he pays less attention to it. On Instagram, people can follow the events of the star’s private life.

Subscribers have noticed that Kevin's posts and videos are commented by a beautiful black lady (@scxbanx). Her page has many pics of Lee, there is even a photo, depicting the woman together with her and Kevin’s mothers. People can draw a conclusion from the comments below that the couple has been dating since 2017. But it seems that the woman is not Kevin’s wife; they are not married and don’t have children.

Nowadays, the American athlete continues to build a career and increase the number of victories. In May 2019, Lee faced Brazilian Rafael dos Anjos at the UFC Fight Night 152 tournament in Rochester. At the beginning of the bout, Kevin dominated the fight, but the Brazilian’s takedown in the third round and arm triangle submission in the fourth round helped the latter to pull out a victory.