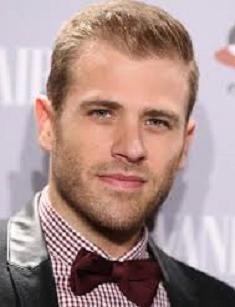 He is a skilled actor who appeared on several commercially and critically successful movies and TV shows. Scott decided to be an actor in his early ages and studied theatre at the university.

He was born on the 21st of September in 1983. The actor spent his childhood in Sudbury together with his parents and three siblings. His father was a dentist, and his mother was a dancer. Since childhood he was interested in acting, that’s why he decided to study theatre at the university.

He is one of the reputed actors with numerous credits. He played both on the big and small screen. The breakthrough of the actor happened in 2008 when he got the leading role of the police officer in the soap opera. This was Scott’s lucky ticket. He came on the set to appear on several episodes, but the producers liked him so much that he became the constant actor of the opera. According to the plot of the TV series, his character dated several women and struggled with his sexual orientation. That he was involved in a love affair with a man on the show, the religious actress Patricia Mauceri preferred to quit the show not to be involved in the gay storyline.

Then he began receiving roles after roles featuring in the number of TV shows in episodes. The other successful role which added recognition and fame for Scott was the role of Chad in the movie “Confessions of a Shopaholic”.

He is openly gay. When he was 19, the actor told it to his relatives. In 2018 he began dating with Zach Volin. He is a demanded actor who earned a decent amount of money. His net worth is $3 million.

Scott has got a brother, who is well-known for the public as a Captain America, Chris Evans. The brothers keep warm relationships and featured on several TV shows. In 2019 they appeared on the tonight show where the brothers told their secrets. Scott confessed that the most difficult was to reveal himself to Chris. He worried a lot and finally said to him. The only thing which Chris asked was why Scott hadn’t told it earlier. By the way, it was up to Scott’s elder brother to discuss his sexual orientation to the public. During the interview, Chris said that his brother was gay.

In interviews, the actor often shares his experience of coming out. He told once, that when he said his sexual orientation to his mother, she just said

“Cool. What would you want for dinner?”. His mother said that when she gave birth to Scott and saw him the first time she said, “Oh, yay. I got a gay one.”

He is active on social networks. Thus, he continually shares pictures with his partner on Instagram. Scott is a handsome man with an athletic body. His height is 6 feet. He is not a skilled actor but also a splendid dancer.