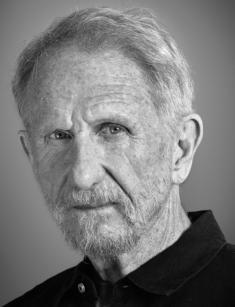 Rene Auberjonois was an outstanding actor and singer. He is a sought-after character actor whose hundreds of roles included a governor’s officious assistant in Benson, an alien security officer on Star Trek: Deep Space Nine, and a managing partner in Boston Legal. Rene became one of the best voice actors, working with film companies and in the game industry.

The famous movie star was born in New York City. The boy was raised in a family of talented people. Firstly, his father was a Cold War-era foreign correspondent and Pulitzer Prize-nominated writer. Secondly, his paternal grandfather was a Swiss post-Impressionist painter. Thirdly, his mother has a kinship with Joachim Murat, one of Napoleon's marshals. Rene's family was quite big: he had a sister and a brother, and two half-sisters.

Initially, his family lived in New York City, but after World War II, they moved to Paris. Rene said that the desire to become an actor appeared when he was very young. He also told in the interview that he decided to be a professional actor when the family stayed in Paris. It is not clear, what influenced him: the atmosphere or people around. They lived there for several years and then returned to New York. At that time, Rene started to perform in front of the public. He attended the classes in the community theater group and was given the young boy's part 'Bert' in the 1947 play All My Sons. In 1962, Rene got an education at the Carnegie Institute of Technology, at present, it is called Carnegie Mellon University. He was a good student who also displayed great potential in acting.

At the start of his career, Rene performed in theaters mainly. He moved to different cities to gain experience. Rene supported many theaters later and he even offered his help to the organizations.

In 1968, Rene was offered a role on Broadway and appeared in three plays simultaneously. In 1969, he earned a Tony Award for his performance as Sebastian Baye alongside Katharine Hepburn in the Broadway musical Coco.

After making Broadway appearances, Rene showed up at the Mark Taper Forum, as Malvolio in Twelfth Night and as Stanislavski in Chekhov in Yalta. He also went on tours as a member of the Second Drama Quartet.

Rene was a director of many theatrical works. In 2018, he was inducted into the American Theater Hall of Fame.

After the great start in theater performances, Rene began to appear as a movie actor. He got his first role in the original film version of MASH, a black comedy war film directed by Robert Altman. His other notable appearances include roles in Batman Forever (1995) and Brewster McCloud (1970).

Rene became known worldwide for his talents. His acting skills were appreciated by many people and critics. He continued to star in movies and also started to appear on TV, taking part in numerous television series. One of them was the show Frasier, which was warmly received and won thirty-seven Primetime Emmy Awards. It was a record for that time. Now it's known that this show is going to be aired again in 2020. In addition to having been a regular actor, Rene worked on other TV shows, including Star Trek: Deep Space Nine in science fiction.

One of his best roles is the character, Fortunato, in an episode of American Masters entitled Edgar Allan Poe: Terror of the Soul (1995).

The actor also voiced many animated roles. From 1986-87, he voiced the cartoons. Later, Rene decided to try himself in radio drama. His voice became one of the most recognizable. He read "The Stunt" by Mordechai Strigler and read works of dramatic fiction on the event Selected Shorts. He was the voice of Peter Parker on the 1972 Buddah Records Spider-Man LP From Beyond the Grave.

The actor is also one of the most famous voice actors in the video games industry. Rene started to voice video games with the role of Janos Audron in Soul Reaver 2, an action-adventure video game developed by Crystal Dynamics. He enjoyed this work and continued to voice the character in a series of action-adventure video games: the Legacy of Kain series. Rene admitted that he had another opinion about voice actors before doing it himself. He was amazed that the quality of the writing was very high. Rene worked as a voice actor for the Legacy of Kain video game series, the game Angler in the Pirates of the Caribbean: At World's End, and many others.

Rene was a married man. He was in a relationship with his wife Judith since 1963. They have raised two children, a daughter named Tessa and a son named Remy.

According to the latest news, the actor passed away on December 8, 2019. His son, the actor Rèmy-Luc Auberjonois gave an interview, in which he said the cause was metastatic lung cancer. The famous actor died at his home in Los Angeles.

On his Instagram account, Rene posted many pictures from his everyday life: family, work, nature. And he also was fond of sharing the quotes of famous people about life in the general sense, such as “Every day I wake up not-dead is a gift”. A few days before his death, he posted a picture with the words:

“Life is too short to be lived badly”.

His followers suggested that the actor tried to remind people about the value of life and expressed their sorrow leaving comments under his posts.

In the field of art, there is a Swiss post-impressionist painter with the same name as the actor.

Rene had a net worth of $5 million.