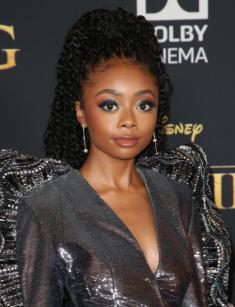 Skai Jackson is a young American famous actress mostly known for acting as Zuri Ross in the Disney Channel series Jessie (where she worked alongside Cameron Boyce and Debby Ryan) and Bunk'd. Having started performing as a kid, Jackson has already reached high results. So, it is high time for us to know how she managed to build an actress career at such an early age!

Skai Jackson's birthplace is New York City – she was born there on April 8, 2002.

She has partial roots in the island Roatán, off the coast of Honduras. Her recent ancestors in Honduras are black. Besides, Jackson has some relatives in the Republic of Uganda, East-Central Africa.

From the very infancy, Jackson was involved in show-business. She was just nine months old when she first appeared on the small screen. So, her career started when she, as a child model, appeared in numerous photo shoots, national commercials, including for Band-Aid bandages.

The first serious project Skai Jackson took part in was the independent movie Liberty Kid (2007). Shortly after a young celebrity was invited to star in an episode of Rescue Me (2008) and the movie The Rebound (2009). In 2009 Skai Jackson succeeded to act as Little Fish in the Nickelodeon pre-school animated series Bubble Guppies. In 2010 she started working in the television series Team Umizoomi, Royal Pains, and Boardwalk Empire as the main protagonist. Besides, in her career, Jackson starred in the 2011 movies Arthur and The Smurfs.

2011 was marked by Skai Jackson's role of Zuri Ross in the Disney Channel sitcom Jessie. That time she was 9 years old. Jackson was asked to be active on social media accounts to promote this TV show. Being an active member of social media sites, Skai Jackson helped the world to witness her graceful growth both as an actor and a model.

In 2014 she starred in an episode of Disney XD's animated series Ultimate Spider-Man. In 2015, a new Disney Channel series Bunk'd, a spin-off of Jessie, was announced where Jackson reprises her role of Zuri Ross.

Getting a lot of appreciation for acting, memes and her hair, she has become an inspiration for a Marvel character, Riri Williams, the new Iron Man. Confirming it, Mike Deodato Jr, comic book artist, tweeted «Riri Williams was based on the beautiful young actress @Skai Jackson.»

Skai's love for fashion has grown with years, and it can be clearly seen on her social media platforms, award functions, or any red carpet event. According to Jackson’s admissions, her future plans include creating her own fashion line or working with a major fashion company and getting into directing and producing. (Interestingly, she is often compared to other fashion Hollywood girls – Riele Downs and Jenna Ortega in terms of clothes style. Their fans have even argued in social media about whose outlook was better at the BET Awards 2018.) Doing a few dramatic films also lines up in her wish list.

Once in an interview, Skai was asked by journalists how passionate she was about acting. She responded she always had a passion for acting since she was four years old. The celebrity exactly knew that this was what she wanted to do, she even mentioned on the shows The Cosby Show and This Is So Raven that as a young girl, she made the decision that acting was something that she wanted to do for the rest of her life.

Remarkably, Skai has inspired many to embrace themselves and believe in being who they are and never give up. In one of the interviews, she shared she was bullied for being short in her childhood. This young star also advised every kid who faces any act of bully to talk to an adult and to stand up for themselves. Neither did bullying nor did her ethnicity stop her from achieving what she has dreamed about.

Skai has always been confident in herself and her capabilities; she has always known something or the other would work out for her. She developed a passion for acting and fashion at a very young age, and today she has succeeded in both. Her growth was no secret, her fans and everyone else in the world has seen how graciously she has transformed. Skai Jackson herself likes to compare her personality before and after, then and now and see the difference. Now she is only 16 years old and she has scorched every red carpet event she has ever attended. Like many other girls, Sarah Jessica Parker; the actress is known for her role as Carrie Bradshaw in 'Sex and the City', inspires her too.

In her career, Skai Jackson also had to face the rage of her haters, and she dealt with it perfectly! People made a meme of one of her photos that she had published on her Instagram account. At first, it took her by surprise, but then the unexpected happened, she published those memes herself and described them as funny. "We turned her into a meme, and she left us all screaming her damn name. Slay, SKAI JACKSON" was tweeted by Janet Monk, an American writer.

Skai is not only known for her beauty, acting, or the revolution she is creating in the fashion industry. She stands for the right cause too and is courageous enough to point out the wrong. Skai hit the headlines when she slammed Azealia Banks, an American singer, for her tweets.

So, it all started when Azealia made a racist and homographic comment on Zayn Malik, a former member of «One Direction,» to which Skai replied by tweeting that Azealia Banks needs to simmer down a little. It marked the beginning of twitter feud between them. Azealia then responded to it and again made a racist comment saying that Disney Channel didn’t like girls of Jackson’s color and advised her to enjoy the time cause soon, according to Azelia, Jackson’s fame would finish. She also added "ur mom's been pumping you out to Disney since you were a lil girl. Let's see what you end up like at 21. Bye!"

To this tweet, Skai replied she had a career before Disney, and she was sure she would work after. And, according to Jackson, she was sure she would not turn out like Azealia bitter and miserable. She also added, "you give black women a bad name. I'll be praying for you." Skai also tweeted saying that she has a class what is higher than hers.

The point where Skai mentioned about having a class higher than Azealia's is very true. Making a racist comment or rant is offensive; not only did she raise her voice against this crime but also taught a lesson to stand up for anything that you feel is wrong.

Skai has two siblings, a sister, and brother whose names are not revealed. Her mother also handles a 'YouTube' channel named 'kiyacole1' that has more than 11K subscribers, and Kiya has featured Skai in one of her videos.

Skai Jackson likes to experiment with her appearance. So, recently she has changed several haircuts: she has had long hair, short hair and even braids.

Speaking about Jackson’s relationship, she is single and there has been no information about her possible boyfriend. Jackson’s career seems to be her true love, indeed.