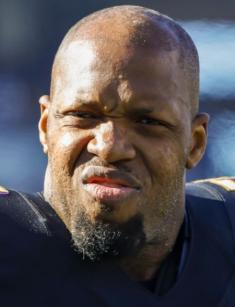 Terrell Suggs is a long-time football player who performed for the Baltimore Ravens for 15 years. The defensive end is known as one of the sports veterans: he participated in the 2003 Draft and continues to play today. The Kansas City Chiefs has become his new home in 2019.

The future sports star was born on October 11, 1982, in Minneapolis; he had two brothers, Donald and Hermann. Soon after the boy was born, the family left for St. Paul, Minnesota, where young Terrell took an interest in football. He made friends with the would-be baseball player Joe Mauer at this period.

As a teenager, Suggs moved to Arizona and received his education at Hamilton High School. The young man’s early achievements were notable: he won the Arizona Player of the Year by USA Today, and Sporting News included him in its best athletes’ list.

After graduation, Suggs enrolled at Arizona State University and joined its football team as a defensive end. New prizes for excellent performances followed: Ted Hendricks Award, Unanimous All-American, First-team All-Pac-10, and others. Overall, T-Sizzle had 163 tackles during the collegiate period.

In 2003, 20-year-old Terrell became one of the youngest football players during the first round of the draft; the Baltimore Ravens selected him. It was the beginning of a long-time collaboration.

The debuting games of the newbie were successful: he performed sacks in his first four matches and had 27 tackles within the season. The NFL appreciated Suggs’s endeavor and awarded him Defensive Rookie of the Year.

From 2004, Terrell regularly participated in Pro Bowl. The next year, he switched from the outside linebacker job to defensive end’s duties thanks to the team’s new coordinator. It was the right decision that helped improve Sugg’s stats and allowed the Ravens to create one of the strongest defensive lines in the NFL in 2006. In 2007-2010, the DE’s contribution was also essential.

2011 was marked with a breakthrough and many accomplishments: number 40 in the NFL’s Top 100 Players, Pro Bowl, and the first All-Pro first team. Suggs was named the Defensive Player of the Year.

2012 began with a serious injury: tearing Achilles tendon. Although experts expected him to miss the season after the surgery, the athlete recovered promptly and showed good results. Fans had another reason to celebrate: the Super Bowl XLVII victory; the Ravens had the final flourish with the score 34-31.

Suggs continued to give everything he had to the team. He broke several records, including having more than a hundred sacks. In his last season with the Baltimore Ravens, the man had 34 combined tackles and six passes defended.

2019 became a significant draft year for Terrell Suggs: he joined the Arizona Cardinals and signed a $7 million contract. The first meeting with the Detroit Lions ended with a draw, and other games were not lucky.

The sportsman’s personal life has been stormy. He was dating his girlfriend, Candace Williams, for a long time until she accused him of physical violence in 2009. Still, Terrell and Candace made amends later, and the woman had the protective order canceled; they had two children.

In December 2012, Williams became the athlete’s official wife. They spent three years together and divorced in 2015. Once again, Candace reported abuse, but the kids stayed with their father in the end, despite the mother’s accusations of ill-treatment. Rumors have it Williams is in a relationship with a woman now. Whether the bad-dad information is true is unknown. Suggs often shares photos of his children, and they look happy and well-cared.

Suggs is an active Instagram user, but Twitter notes appear rarely. Judging by his accounts, the athlete is a great fan of Game of Thrones and Star Wars franchises; he also likes memes.

Today, the DE is dating the American actress Tasia Miller. They have posted several romantic pictures and compared themselves to the Game of Thrones characters, Khal Drogo and the mother of dragons Daenerys Targaryen.

Suggs’s nicknames are Hacksaw and T-Sizzle.

Following the release from the Cardinals, the Kansas City Chiefs claimed the athlete off waivers on December 16, 2019. Rumors had it the Patriots could have taken him.