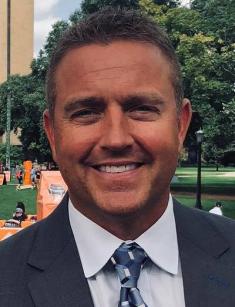 Kirk Herbstreit is an American football player and sportscaster. He works as an ESPN analyst and a commentator for ABC and NFL.

The future celebrity was born on August 19, 1969, in Centerville, Ohio and got his education there. He has a degree in Business Administration.

He has a younger sister, Terri Holmes. His mom's name is Judy. His dad's name is Jim. Jim used to be a football player and then, became a coach. With such genes, it seems only natural that Kirk has always showcased perfect stats.

At school, this boy was equally good at football, baseball and basketball. However, he felt most comfortable when performing as a football quarterback. In the university, he led his football team, was appointed its co-captain and was voted its MVP. In 1992, he set a state record for pass completions. Only in 2006, another player managed to outperform him.

Herbstreit could have become a professional NFL sportsman — but the career of a broadcaster seemed more appealing to him.

In 1996, Kirk joined ESPN. Together with Lee Corso and other hosts, he became a College GameDay analyst.

Next year, he was nominated for the Sports Emmy Award. Plus, he began to contribute a weekly in-season column for The Sporting News.

In 2022, he signed an Amazon contract. He began to comment for Thursday Night Football on Prime Video alongside Al Michaels. This didn't prevent him from continuing to collaborate with ESPN.

In 2022, Kirk received a coaching job offer from Auburn but rejected it because it involved extremely high responsibility. At the same time, he praises Alabama football and states that the local team has very good odds this season.

He took part in the HawkCast show by AJ Hawk.

In 1998, Kirk tied the knot with Alison Butler. His future wife used to be a cheerleader at his university.

The couple has four sons. In 2000, they welcomed identical twins, Tye and Jake. In three years, Zak followed suit. In 2006, their youngest child, Chase, was born.

Only one son, Jake, decided to focus on academic studies. All other kids preferred to devote themselves to sports.

In 2007, Kirk was rumored to have an affair with Tracy Dunlaw. Neither of them has ever officially confirmed or denied these rumors. Tracy divorced her partner Jerry after the alleged affair. No one knows for sure whether Kirk had any problems with this spouse because of the situation — but at least, they're still together.

The star has pet golden retrievers and adores spending time with them. Besides, he enjoys working out, fishing and playing esports games in his free time. He's a horse racing fan and a foodie, he loves steaks.