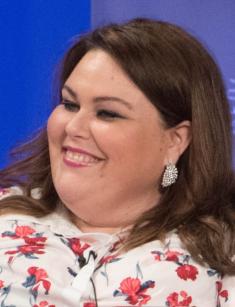 She is an American actress who is well known for her appearance in the drama TV series "This Is Us." The actress's biography is full of struggle and patience. This is a story of a plus-sized actress chasing numerous financial troubles and poor career opportunities with a happy ending.

Born in a low-income family, Chrissy had to overcome money issues almost all her life, even though it didn't stop her from becoming an actress. However, her acting career hasn't always been successful as now. She received little supporting roles in fast forgotten movies and Tv series, but fortunately, she has waited for her breakthrough.

She was raised in Homestead. However, she spent her formative years in Japan due to her father's work. She was grown up by her mother and stepfather. The actress has got two half-siblings.

All her life, the actress had to struggle financially. She came from a poor background. The actress mentioned that her mother sometimes couldn't afford to pay the bills and put the food on the table.

The actress mentioned with kindness her first work at McDonald's. She was treated with respect and dignity and had enough pocket money to pay new sneakers for $120. This work gave her priceless experience of how rewarding a hard work could be and what one gains for being kind to other people.

Besides a handful of TV and movie credits, the actress was far from world fame and recognition. The situation radically changed after her appearance on the drama TV series, where she played the leading role. The actress played the plus-sized woman with a touchy story, which not often seen on screen. Interestingly, before that role, the actress was ready to return her hometown due to poor career opportunities.

Taking part in this project, the actress followed a challenging part of her character's journey. She signed the contract requiring her to lose weight. The actress said it was a win-win situation for her, as she received additional motivating factor to get rid of extra kilograms. The actress said that she found plus-sized bodies sexy and attractive, but she wanted to lost weight due to her health issues.

She got recognition highly for her work on the drama TV series "This Is Us." She was named one of the best-supporting actresses and was repeatedly nominated by Golden Globe Awards. Besides, she won two prestigious awards by Screen Actors Guild Awards. She owed her success a good education and talented acting coaches, among them John Kirby.

Chrissy is a talented singer as well as an actress and makes great perfomances. Besides her acting career, she sings in the band. Having a vivid vocal talent, it is not a big surprise that the actress auditioned on "American Idol." But it didn't work out. As the actress said, she wished to be a respected singer, and her visions didn't correspond with the producer's views of her future participation in the show.

Until 35 years, the actress had to struggle and search for career opportunities. That was the cause of her uncertainty and panic attacks. She had an attack on her 30th birthday in 2010, after which she had to underwent therapy. After that incident she decided to develop herself in such field as self-help.

In 2018 the actress released her first memoir, "This Is Me," the book tells about her life from childhood till the present time.

In 2008 the actress married the British journalist Martyn Eaden. Their marriage lasted for five years, and then the twosome separated. In 2014 they divorced due to irreconcilable differences. In a recent interview, the actress confessed that she met her current boyfriend, thanks to Instagram. The actress attracted the message of her future boyfriend. He was cute and not obnoxious. Metz decided to respond to him. That conversation was the beginning of a new exciting relationship.

Chasing the financial troubles all her life, the actress got used to following a modest way of life. When she attended the auditions for "This Is Us," the actress had 81 cents in her bank account. That's why the TV series "This Is Us" was her lucky ticket. It is reported that she receives $250,000 per episode, and her net worth is about $7 million.