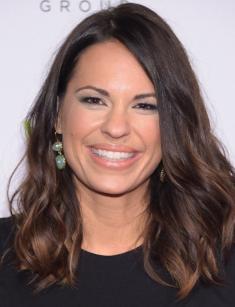 She is a former softball player who achieved height in the sports industry. Since the 2010s the athlete began working on television as a sports analyst.

Jessica grew in a big family alongside her brother and two sisters.

The girl has a good herediity; she followed her dad's steps in some way. Her father had a splendid athletic physique and played football in his college years. Her ethnicity is Mexican. In her childhood, Jessica was extremely active as an athlete.

She began her pro career in 1999. From the beginning, she broke records and won high titles. The athlete played for the Cardinals and repeatedly led the team to a win.

Today she is a bright figure in the sports in the entertainment industry with full recognition. In 2019 the athletes from the national soccer team wore a jersey with the name of a woman they were honoring. The soccer player Andi Sullivan chose the name of Jessica.

The former athlete continued her work as a color analyst on television. In 2014 she began working on ESPN. That year Jessica became the first female commentator for a national baseball league in history.

In 2016 she began working full-time at the Sunday Night Baseball broadcast team.

In 2019 she became an advisory for the Mets. She works on ESPN alongside the other former athletes, including Alex Rodriguez.

In 2020 she was involved in the cheating scandal when a sportswriter informed about stealing signs by Astros during the World series. Jessica gave comments about those incidents and called Mike Fiers to come forward and blow the whistle. The key figure who was involved in the accident was the manager Carlos Beltran. Jessica said that all players who were in the scheme should be punished.

In 2019 the analyst discussed much the figure of Bryce Harper and his possible contribution to the win of the Nationals.

Jessica has been married since 2012. She has got two kids. Her husband is a former athlete, Adam Burks, who served in the Army and worked as a civil engineer, but today he is a stay-at-home dad.

In 2009 he decided to focus on raising kids, as Jessica regularly traveled around the country as an athlete and later as a sports correspondent. She said, "We're a role-reversal family in every way possible. And I love that our country has evolved to that. It doesn't matter who makes money, as long as something is rolling in, and you're happy."

For many years she contributed with the Women's Sports Association. Jessica held the position of the president of that association. Besides, she stands out as an athletic ambassador. Her net worth is estimated at $2 million.