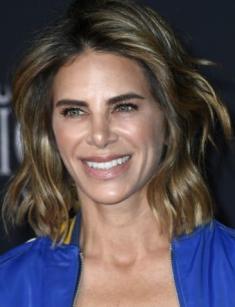 Jillian Michaels is a famous sportswoman who is best known for her contribution to fitness. Jillian is also a businesswoman and author of numerous books about being fit. She is often seen on TV as she starred in the show called The Biggest Loser.

Jillian was born in Los Angeles, California. There is information that her father is a lawyer. Her mother's name is JoAnn.

The big part of her childhood was spent in Santa Monica. Jillian shared in interviews that she had a tough childhood. It was not easy for her to live through the parent's divorce. She also said that when she was young, she had an excess weight having height 5 feet 2 inches. According to Jillian, her classmates made jokes about her and she suffered from that.

Jillian got an education at California State University, Northridge. She had a desire to earn money and started working as a bartender. After some time, she decided to begin a career as a personal trainer.

The sportswoman had a successful start of her career and in 2002, she opened her first business: the sports medicine facility. Jillian became a specialist in several training techniques: kickboxing, yoga, Pilates, plyometrics, and weight training. She had her own clients and began gaining more popularity.

She studied a lot and worked on improving her professionalism. She wanted to specialize in nutrition and wellness.

Jillian became popular worldwide after she launched her Fitness app. It was called the best in health and fitness app category.

Jillian has also made twenty fitness DVD's that have sold over 100 million copies worldwide. She is the recognized author of nine books. She is writing about health and wellness.

For three years, Jillian was a host of a Sunday talk radio show. She then was offered to host a podcast The Jillian Michaels Show. After she starred there, the show was named one of the best shows on health topics.

Moreover, Jillian is the author of several video games that were released in 2008 and 2011.

In 2008, she became the owner of her company Empowered Media LLC. Her website gained a huge audience and was even compared with Netflix’s popularity. Jillian invited many famous people to be guests in the show who are the best in fitness.

In 2004 Jillian starred as a trainer on the reality series The Biggest Loser. She had worked there for two years and was replaced by Kim Lyons. However, Jillian came back to the show in 2007. In 2010, she wrote on her Twitter about leaving the show. After that, she made several appearances on the show in 2013.

In 2010, the sportswoman appeared on a new show named Losing It With Jillian. The main idea was that Michaels visited the home and workplaces of family members for a week.

In 2011, Jillian was offered to participate in another show. She had signed a contract to co-host the show The Doctors, in which she appeared before. On the show, she hosted a recurring segment called Ask Jillian. Her main topics were nutrition and diet. However, Jillian was not satisfied with the conditions of the show and left it in January 2012.

Jillian is known to be very active in charities. She tries to do a lot to help people from different countries. She works with the UNHCR, where she helps raise awareness and funds for refugees around the globe. The number of organizations in which Jillian is huge. She is an animal lover and protects animals and raises problems of animal welfare. Jillian takes part in numerous events that are aimed to motivate people to exercise more.

Jillian is now single. She was a wife of Heidi Rhoades, with whom she has two children. Jillian and her husband adopted their daughter from Haiti in 2012. The couple broke up in June 2018.

Speaking of Jillian's sexuality, she says that she believes in healthy love and doesn't think about a person's gender. She is happy to have a choice in relationships.

On her Instagram account, she has over 1,3 million of followers. Jillian regularly makes posts about a healthy lifestyle as well as motivational quotes.

Jullian is associated with gym fashion and workout clothing. In 2014, she had own line for which she acted as a model.

In 2016, the sportswoman appeared in the hilarious show The Eric Andre Show which rapidly spread through the Internet.

Speaking of her business, in 2012, Jillian contacted CEO Keith Beiling and not only invested in the company but started promoting the brand on her television talkshow circuit. That was a great example of how Jillian Michaels and her business partner, Giancarlo Chersich found Michaels' next big project, investment, and endorsement. Together they had become the 'choosers' making sure each project they worked on actually benefited everyone involved, including her latest investment. She worked with Jawbone and Nike by putting her name and brand behind BodyMedia FIT, which used IBM's data analytics software.

Jillian was recently criticized on the Internet after she commented on Lizzo's body. The sportswoman said that she loves the music of the famous American singer but she is against supporting the body overweight. In one of the latest Instagram post, she wrote that all humans are beautiful but people should think of the consequences of obesity: diabetes, heart disease, and others.

The celebrity has an estimated net worth of $14 million.