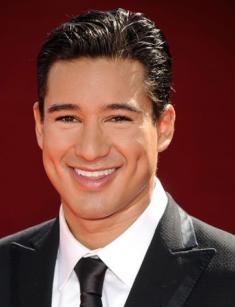 Mario Lopez began building his entertaining career as a kid – he was encouraged to take up dancing and acting by his relatives. By happy coincidence, young Lopez got acquainted with an agent who became his guide towards the world of show-business. Since then, the celebrity started getting roles in movies and TV-shows and succeeded a lot. What pictures and programs is Mario Lopez famous for? Read below!

Mario's parents are Mario Sr. and his wife, Elvia. They welcomed their son in California. Speaking about spouses' occupations, the woman worked at a local telephone station while her husband served as a politician. When Lopez was 3-year-old baby, his family members sent him to take dancing lessons – and he liked this activity very much. By the moment he turned 10, Mario had been noticed by a professional entertainer who later introduced the world of show-business to him.

Lopez has an elder brother.

As for Mario Lopez' education, he got his high school diploma in 1991. Being a student, Lopez dedicated time to wrestling and boxing, took part in local wrestling championships representing his educational establishment.

1984 brought Mario Lopez his TV debut – he was given the role on the comedy series named a.k.a. Pablo. Later that year, Lopez was seen playing in the TV program for children entitled Kids Incorporated. He had performed there playing drums and dancing for near three years before leaving.

1989 was marked by Lopez' appearance as a protagonist in the situation comedy named Saved by the Bell. So, he had the role of A.C. Slater. For acting as this character, Mario Lopez received positive acclaim amongst the youth – cause young people were the main audience watching the show.

The following several years brought the actor a cameo he played in the TV program entitled Superstar American Gladiators. Moreover, he worked as a host of the game program Masters of the Maze. Additionally, he was cast of such pictures as Killing Mr. Griffin and Fever Lake. Remarkably, no one of these projects happened to be successful.

In 1997 Lopez' fans could see one more picture featuring the actor – it was entitled Breaking the Surface. He played there a protagonist named Greg Louganis.

The following year, Lopez was among actors of the series entitled Pacific Blue and served as one of two hosts of the Miss Teen USA.

In 2000 the celebrity contributed to the pictures A Crack in the Floor and King Rikki. Two years later, he took part in an audition for the position of a host of the program entitled Pet Star broadcasted on Animal Planet channel.

In 2008 the star began hosting two television programs - America's Best Dance Crew and Extra. Besides, the same year, he took part in the recording of the movie Husband for Hire. In spite of starring on a big screen, Lopez didn't neglect his Broadway career – around that time he appeared in the musical entitled A Chorus Line.

In 2019 he appeared on The Candace Owens Show.

Mario Lopez’ net worth is evaluated at $20 million.

Dancing with the Stars

2006 is supposed to be one of the most successful years in Lopez' career. So, he first appeared on the popular program Dancing with the Stars. At the end of the season, he advanced to the 2nd place. He was paired with Karina Smirnoff.

Once in an interview with CNN, Marion Lopez told journalist his first girlfriend ever was Fergie. According to him, the two kissed together while starring on a program.

In 1993 the actor was blamed for assaulting sexually towards two women. However, the allegations have never been proved.

Earlier, Lopez had a wife named Ali Landry. The two got acquainted in 1998 and tied the knot in 2004. Their wedding ceremony took place in Mexico. However, partners' marriage didn't last for a long time – Landry filed for divorce three weeks later. In her admissions, she said Lopez' betrayal at his bachelor party became a reason of their separating. Having parted ways with the woman, Mario began a relationship with Karina Smirnoff – he was teamed up with her while appearing on Dancing with the Stars. They broke up in 2008.

At the end of 2008, the celebrity was introduced to Courtney Mazza. They shared vows four years later, in December 2012. The spouses are parents for a daughter and two sons.

Lopez is a very religious person. He was raised according to Catholic canons and got used to visiting a local church once a week.

Mario Lopez is a very interesting personality. Apart from being a popular TV star, he is also a prominent book author. Thus, he has written three books of non-fiction genre. The latest one is kids' book where Lopez shares stories related to him and his daughter.