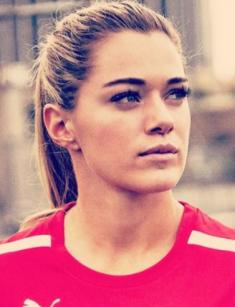 She is a professional athlete who is widely known among soccer fans. She is skilled, sturdy, and stable. Her talents are highly recognized. Kealia played for two soccer teams, as well as the national team, and was honored with many accolades. She successfully mixes her professional and private sides of life and has got many friends in the sports industry. Moreover, the industry presented her with a future husband.

She was born in the United States, a child of Hawaiian who wanted to name a daughter after a beach. That is the reason for the soccer player's unusual name as her father called her like the beach in his hometown.

All her childhood, the girl spent in Utah, with its beautiful mountain ranges, lovely spring sessions, and powder Christmases. Kealia was raised alongside her sister, who is an athlete with a vivid talent too. Her sister played for the university team and led it to win in the NCAA championship. However, Kealia's sister decided not to continue her soccer career after graduation. Unlike Kealia Ohai, who displayed impressive skills and fantastic statistics from high school. During her school period, she gathered almost all possible honors as a leader of the team, helping it to take four championships. Their parents can be proud!

After graduation from high school, the soccer player decided to join the great team "Tar Heel." Unlike her sister, who decided to go to college in California. That period of her life was one of the best. The young athlete was good at both making friends and perfect playing on the field.

With fantastic statistics and full recognition, she joined the "Houston Dash" in 2014. The coaches and management of the team didn't conceal their feelings about that fact. The head coach said that the day of signing the contract with the player was an amazing day for the team. He highly accepted her skills calling the athlete one of the nation's best forwards. The coach had hopes of stretching defenses with her speed.

And that year she was named the second-best soccer player in the country. By 2016 the soccer player became the captain of the team. At the beginning of January, as well as the 2020 year, the official reported the important news. The soccer player was shifted to the "Red Stars" in the result of the exchange trade. The management of the new team looked forward to enhancing the team with such a talented player. The colleagues from her former team thanked her for the great games. Meanwhile the new team praised her for her decision to join the new organization.

Besides his careers in clubs, Kealia also played for national teams since she reached 13 years. In 2012 she led the team to win over Germany and took the champion's cup.

The athlete successfully mixes the professional and private sides of her life. She met her boyfriend, who is from the sports industry too. His name is JJ Watts, and the loving couple got engaged in May of 2019. In the very beginning, the twosome preferred to keep the law social profile and not to publish their relationship. However, after the proposal, the soccer player decided to discover her private life and posted photos on Instagram.

JJ Watts received exceptional support from his future wife, who has rich experience and a leader's skills. Their relationship had started from friendship two years ago. That time two young humans were entirely focused on their careers and had no idea of marriage. But the shared vision of life made them very close. She said, "We understand each other's careers, and we're both professional athletes, and we understand each other's goals."

The news of their engagement immediately spread across the Internet and attracted more attention to her figure as reporters began naming her the fiancé of the prominent football player. However, that fact doesn't lessen her achievements in the sports industry, which are excellent.

Even though soccer is not the top sport in the States, the athlete has been very demanded as well as productive. That allowed her to receive good earnings. Her net worth is $1 million. Her contract annually gives her about $100,000.

Her height is 5 feet and 5 inches. It was reported that the soccer player is legally blind on one eye. However, that fact hadn't stopped her from making a successful sports career. Today she has several relatives in her big family who are athletes too, including her future husband and brother-in-law.