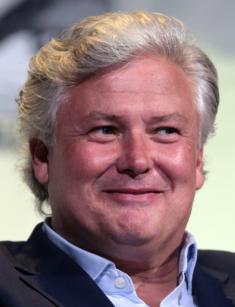 Conleth Hill is a famous actor from Northern Ireland known for starring in different movies and TV-shows of the United States and Great Britain. Hill got the significant popularity after acting as Lord Varys in the famous HBO drama series Game of Thrones and as Edward Darby on the USA Network series Suits.

Conleth Seamus Eoin Croiston Hill is a full name of the star. His birthplace is Ballycastle, County Antrim, Northern Ireland – he was born there on November 24, 1964. In his childhood, Conleth had an extended family – besides him and his parents, there were three children. By the way, all of them work in show-business. So, his elder brother is a cameraman, his sister is a producer, and his younger brother, a sound engineer—who is also a member of the infamous ‘Game of Thrones’ crew—won three ‘Emmy Awards’ for his sound mixing on the show.

Conleth Hill studied at ‘St MacNissi's College.’ Later he decided to enter the ‘Guildhall School of Music and Drama’ for their acting program, graduating in 1988.

Conleth got his first Broadway role in the Canadian production of the play Stones in His Pockets, a Marie Jones's production. Interestingly, after starring there, Hill won a Dora Mavor Moore award. That time the actor was often invited to different TV-shows and series. In 1998, viewers could see him in the series Boon in 1988 and then in the same year he appeared in Casualty.

Having got secondary roles in several playings, Conleth Hill acted as Roache in Blue Heaven from 1992 to 1994. Totally, he worked there for 7 seasons. In 2002 the actor got the role of German professor Max Staefel in the television adaptation of Goodbye Mr. Chips. In 2007 he worked on the show The Life and Times of Vivienne Vyle - his character was Jared. Conleth’s movie debut was a role in the film ‘Whatever Works.’

Conleth was also a star of theatres – so, he played in Uncle Vanya, in Lyric Theatre, in All's Well that Ends Well as Parolles, in National Theatre, in Philistines as Teterev, in National Theatre, and in many others. His recent theatre playing was Who's Afraid of Virginia Woolf?- he acted as George, in Harold Pinter Theatre, London, 2017. Conleth worked there with Imelda Staunton (wife of Jim Carter, the star of Downton Abbey).

Conleth Hill came to prominence majorly due to working in the HBO television drama series Game of Thrones, based on the novel series A Song of Ice and Fire by George R. R. Martin. His character, Lord Varys is a very mysterious and strange role. Already in the first season, he made people pay attention to his performance. As a result, the player got a huge quantity of fans worldwide. Conleth Hill once shared his thoughts about the character:

"The key to Varys is that he's one way in public when he's working, very fey, giggly, and effete for want of a better word, but there are moments when he drops all that and speaks honestly. That stuff is great to play.”

His statement led many to suspect if Lord Varys is set to die in the final season. However, the truth is yet to be confirmed. None of the character's fate is known. From Jon Snow to Daenerys, none of the big shots from Westeros are safe at the moment as the screenwriter, David Benioff doesn't pick a favorite.

Conleth's Varys is also one of the possible characters to be beheaded, burnt by the dragons, or die in a gruesome death in the next episodes.

Yet for all his stage acclaim, TV work has been harder to come by… until HBO drama Game Of Thrones, which Hill describes as “a life-changing job.” But the drama of swords, snow, and sauciness too almost slipped through Hill’s fingers like a greasy dagger. He was not originally seen for the part of the bald informer Lord Varys, known as the King’s Spider.

Initially, Conleth Hill applied for playing King Robert Baratheon on the series but was eventually offered to act as Varys.

He succeeded to reprise his role in the following show’s seasons. Conleth’s role became stronger and stranger, more influencing in the plot. Meanwhile, Hill also acted as Edward Darby in Suits, Sergeant Upton in Arthur & George, and Elsie in Peter Kay's Car Share.

Hill’s film career has not been as glorious as his television or stage career, although he has appeared in quite a few movies like Perrier's Bounty, Salmon Fishing in the Yemen, The Shore and A Patch of Fog after he made his debut in Whatever Works as Brockman. He appeared in Series 2 episode 2 of Peter Kay's Car Share as Elsie, the drunk deli counter supervisor.

In 2018 Conleth got the role in the BBC movie Dave Allen at Peace. There he worked alongside Aidan Gillen. Interestingly, they were colleagues in the Game of Thrones. Besides, among movie’s actors, there were such stars as Tommy Tiernan, Robert Guy Bathurst, Ian McElhinney, Simon Day and Julian Rhind-Tutt.

His stage and television careers have earned him a lot of fan following, and he was given a Laurence Olivier Award for Best Actor in 2001 as well as two Tony Award nominations for his work. He won the Oscar for The Shore for Best Live Action Short and also won the Drama Desk Award for The Seafarer. That shows how much he has accomplished in his career.

Actors net worth is evaluated at $2 million.

The married life of Hill is something that his fans are always curious about. Back in an interview in 2015, he revealed that he had never married in his life. That is enough to make people know that he is not married and instead has his focus shifted on his professional life. While some say his professional obligations are the reason why he never had a wife, some people also speculate it to be because of his gay sexuality. But, those rumors remain unverified until and unless the man himself comes forth and affirms them, which he has not done yet. So, no major conclusion can be reached as of now regarding his sexuality.

There are gossips Conleth Hill is related to Benny Hill, an English comedian, and actor. However, there is no proof.