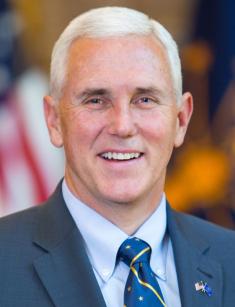 Mike Pence is an American political figure and the current vice president of the country, who entered the office during Donald Trump’s presidency. Despite Trump’s impeachment, Pence will be an essential figure in the upcoming pre-electoral campaign in 2020.

The future vice president was born in Columbus, Indiana, on June 7, 1959; his parents, Nancy Cawley and Edward Joseph Pence Jr., had six children. The father participated in the Korean War and stood out for his courage; he created a business, a chain of gas stations, later. The mother assisted her husband, kept the house, and brought up the kids.

The parents’ example inspired Mike: they were successful entrepreneurs and encouraged their sons and daughters to value work.

The boy went to Columbus North High School and then continued his education at Hanover College, majoring in History. In 1983, the young man enrolled at Indiana University to study law and successfully earned his Juris Doctor degree in 1986.

After graduation, Pence gained some experience in his profession but felt the need to move further. He used to host several talk-shows on the radio and discuss political issues pertaining to his home state, Indiana. Once again, it was not enough for him, and Michael decided to focus on his campaign for Congress.

The first two attempts to enter the House of Representatives failed; Pence achieved his goal in 2000 in Indiana’s second congressional district.

Mike Pence’s work in the House of Representatives was marked with the opposition to the No Child Left Behind Act; he also became the Republican Conference chairman in 2009. Although Pence suggested 90 bills and resolutions, they did not turn into actual laws. The man’s conservative views gave him much praise from some Republicans and editions, such as Esquire.

In 2013, Pence surpassed his Democrat rival John R. Gregg by a slender margin. His governorship did not always go smoothly: the controversial RFRA could possibly allow discrimination from businesses. Later, Pence signed the specifying act prohibiting the discrimination of LGBT people.

In 2016, the politician was selected as Trump’s running mate, along with Chris Christie and Newt Gingrich. Pence’s influence, networking, and accomplishments were even better than those of the future Republican candidate, and he could have claimed the position. Pence’s opinions were deeply conservative; he supported the Mexican wall and temporary immigrant suspension ideas.

Michael Pence became the vice president on November 8, 2016. He played an essential role when Trump’s administration was established, working as an arbitrator between the newfound president and the Republican part of the Congress.

The VP has participated in thirteen tie-breaking votes, more than any of his predecessors from Indiana. In spring 2017, he had several meetings on peace with leaders of the Asia-Pacific region; the appointment with the Australian PM Malcolm Turnbull closed the trip.

When NFL athletes knelt during the national anthem, the politician’s position received much criticism; he believed it was a matter of disrespect to America’s past. In winter 2018, Pence represented the US delegation at the Olympic Games; he remained seated while Korean athletes were walking at the ceremony; accusations of hypocrisy followed these facts.

Mike often accompanied Trump during his trips to military objects; for instance, he attended the meeting at Andrews Air Force Base in May 2018.

In summer 2019, some experts believed that the diplomat Nikki Haley would be a better candidate for Trump’s running mate during the pre-electoral campaign in 2020. However, the billionaire preferred to keep Pence. Today, after the president’s impeachment, there has been no news that Mike Pence is going to decline from this job.

Mike Pence has established the image of an exemplary husband and father. He met his would-be wife, Karen, as a student of Indiana University; the couple married in 1985. Three kids were born in this union: Michael, Charlotte, and Audrey.

The spouses adore pets and have many of them. However, animals not always love him. In 2018, Pence mentioned that a winning horse American Pharoah bit his arm.

Pence’s beliefs are traditional: he is a devoted Christian and attends church regularly. Although he described himself as a Catholic in the mid-1990s, his family converted to the evangelical megachurch later. In the 2010s, the man told journalists he was “a born-again, evangelical Catholic”.

Mike Pence’s net worth is $1 million in 2019. His approval rating is 37% on YouGov. Sometimes, the politician is involved in weird rumors: for example, Donald Trump presumably wanted to replace the VP and appoint Sean Spicer for this position for his performance in Dancing with the Stars.

In 2018, the rapper Eminem released a new album and criticized Donald Trump and events in the country; he also mentioned Pence in his track “The Ringer”, referring to his private parts.