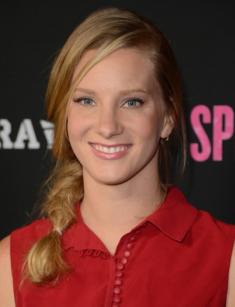 Heather Elizabeth Morris is a famous American actress, dancer, singer, and model. Mostly, she is known for playing Brittany S. Pierce in the Fox musical comedy-drama series Glee (2009–2015), starring in the sitcom «Raven’s Home» and in the «Once Upon a Time.»

Heather's birthplace is Ventura County, California, the United States. She was born there on February 1, 1987. When she was a child, her family moved to Scottsdale, Arizona. At the age of 9, Morris started dancing. She danced many different styles, including jazz, tap, and contemporary. As a teen, Morris faced a tragedy – when she was 14, her dad died of cancer. It affected her, but she managed to get through it and come back to hobbies. Morris studied at Desert Mountain High School. Having graduated, she entered a local university. However, she didn’t enjoyed studying there and moved to Los Angeles as a 19-year-old girl.

2006 was marked by Morris' first significant work – she appeared on So You Think You Can Dance Season 2 where she made it through "Vegas Week" without being cut. Having got to the final, she failed by a vote of 3 to 2. But it couldn't disorder her – and she carried on dancing.

In 2007 Heather got acquainted with Beyoncé and succeeded to be one of Beyoncé's backup dancers on The Beyoncé Experience world tour. Also, they worked together on a mini "Single Ladies (Put a Ring on It)" promotional tour that included 2008 performances on the American Music Awards, Saturday Night Live, The Ellen DeGeneres Show, Today, and MTV's Total Request Live finale. Moreover, she performed at the 50th Annual Grammy Awards in 2008.

Later she was invited to play a secondary role in the movie Fired Up – starring there; she was introduced to choreographer Zach Woodlee. He noted her talent and offered to dance on other shows he was choreographing, such as episodes of Eli Stone and Swingtown, and the movie Bedtime Stories. Eventually, the young star got a role of Brittany on Glee.

That time Heather became more and more popular. In 2010, Morris got the 58th place in the Maxim Hot 100 list. Also, she was included in the AfterEllen hot 100 list – she finished 2nd.

In 2011 fans could see Morris in a back-to-school commercial for Staples Canada.

In the October 2011 issue of Fitness magazine, she stated that she had had her breast implants removed. "Implants were something I thought I wanted when I was younger, and now I don't. It was hard being active with them because my chest was always sore. It hurt a lot, and I didn't like always being in pain, so they had to go!" Her breast implant surgery was done sometime between her time on So You Think You Can Dance at the age of 18, and the age of 21 when she was a backup dancer for Beyoncé.

Besides dancing, Heather intended to develop her acting abilities. So, she started taking acting lessons. That time Woodlee asked her to teach the choreography for Beyoncé's Single Ladies dance to the actors.

Heather herself succeeded to get the role of Brittany. Initially, her character was secondary. But later screenwriters changed the spot, having noted her talent and Heather began appearing on stage more often.

Heather's role grew during the last nine episodes of the first season. Due to positive fans' reviews, she was promoted to official series regular status during season two. She was at the spotlight in the second episode called Britney/Brittany, (a tribute to Britney Spears). There she performed with a Spears' I'm a Slave 4 U and Me Against the Music – she sang the latter alongside Naya Rivera. As a result, later she got many other singing and dancing central scenes. Besides, in the second season, Heather was shown as a lesbi with Rivera's character. Their playing was taken ambiguously. Interestingly, Rivera is Morris' best friend.

Season 3 also continued their lesbian relationship with Rivera. Heather starred in the episode Prom-asaurus. In the last season's series, the actress reveals that she has an 0.0 GPA and that she will not be graduating.

In 2011, while being on tour, Heather sang Britney Spears' track I'm a Slave 4 U. Besides, she was invited to be a dancer in the Single Ladies, Valerie, and Safety Dance numbers.

The beginning of 2011 was marked by Heather's appearance in a January 2011 video for the comedy website Funny or Die, Nuthin' But A Glee Thang a parody of Nuthin' but a 'G' Thang by Dr. Dre featuring Snoop Dogg.

In 2013 it was said in Social Media that Heather would not be going to appear in the Season 5. However, the news happened to be a gossip – she starred in five episodes in the show's sixth and final season, including the series finale.

In 2017 Morris played Jenna, a woman desperate to have her own wedding to escape the clutches of her abusive aunt in the movie Psycho Wedding Crasher. Morris’ character spent her whole life watching Aunt Daisy (Joan Van Ark) make wedding dresses for other people's weddings. Jenna knows that getting married would be her way of escaping Daisy, so she's pleased when she meets the man of her dreams – Glenn (Jason Cermak). However, Glenn is about to get married to Marci (Fiona Vroom)! Rather than just move on and try to find another man, Jenna decides she has to marry Glenn, even if she has to kill Marci to do it.

The film is not advertised as "based on a true story." It was written by Dick Bruna and Manny Dearest writer Bryan Dick, from a story by Lifetime movie veterans Ken Sanders and Daniel West. Director David Langlois also helmed The Hot Karl (2001) and Shattered Souls (2002).

Heather Morris has been cast on Dancing With the Stars and her involvement on the show has been met with mixed reviews as she has an extensive background in dance.

Many have spoken out online, saying that Morris has an unfair advantage. Morris has actually said that she was first asked to be on the show in August of 2015, but she was two months pregnant, so she rejected the offer.

On the show, Heather was paired with professional dancer Maksim Chmerkovskiy. However, when he got injured, he was substituted with Alan Bersten for three weeks. They performed with «Shut Up And Dance». Morris and Chmerkovskiy started dancing together again in the sixth week of the competition, on April 24, 2017, but were eliminated despite receiving a perfect score of the season and topping the results board.

Besides, Morris has given her voice to Heather Mason, the main character of the computer game Silent Hill.

Heather Morris is an author of the book «The Tattooist of Auschwitz» - a beautiful, illuminating tale of hope and courage.

Morris’ net worth is evaluated at $4 million.

Heather's husband is Taylor Hubbell. The two met when Hubbell was a college baseball player. They studied at the same High School but didn't communicate while attending it. They got acquainted when Morris moved to LA and Taylor messaged her on Myspace. In 2011, talking about Taylor while an interview, Heather said she really wanted to marry him and give birth to children. They rented a flat together from the beginning of 2012. Their first child - a son named Elijah "Eli" Beckwith Hubbell, was born on September 28, 2013. He got his name in honor of Taylor Hubbell's older cousin. In 2014 the couple engaged. Their wedding was held on May 16, 2015. The second their kid Owen Barlett Hubbell was born on February 11, 2016.

Hubbell studied political science and government at the University of Louisiana at Lafayette. While still in college, he played baseball for the Louisiana Ragin' Cajuns. His LinkedIn profile lists his many jobs related to golf, so we think it's safe to say that he has a passion for the sport. He worked as an assistant golf professional at the Wood Ranch Golf Club from 2012 to 2015, as well as was the tournament director and membership director for the American Golf Corporation.

He is currently the director of membership and marketing at the North Ranch Country Club.

Hubbell is active on Instagram where he's got over 5k followers, while Morris has an Instagram following of more than 350k. The couple loves posting about their kids on Instagram and from Hubbell's posts, we deduce he's a romantic and family-oriented guy.

When he's not posting pictures of his cute baby boys and tagging his wife, Hubbell is posting Pinterest-level pictures of furniture he's made himself.