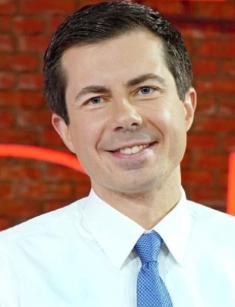 Elite education, high level of knowledge, and natural charisma made the 38-years-old politician well-established and widely recognized. Nevertheless, Pete has something more than excellent physical and intellectual features. He also has got rich experience. The promising politician has built his political career serving as a mayor in his hometown. Besides, he served in the national army. In 2015 he made a coming out.

He was the only child in his family. His father was born in Malta and was going to become a Jesuit priest. However, he emigrated to the USA and had become a professor of literature. He worked at the university for 29 years. Pete's mother was an American.

After education, Pete tried his hands at various jobs. He interned at a television channel as well as interned for a Democrat. After the end of his internship, he worked on a presidential campaign as a research and policy specialist and as a consultant at a management consulting firm.

In 2009 he joined the army. During seven months in 2014, he served in Afghanistan as a naval intelligence. During his service, Pete contributed to the identification and disrupting terrorist finance networks. He also worked as an armed driver. To communicate with local people, he learned a local dialect. In 2017 he resigned his commission.

In November 2011, he became a major of his hometown. Being only 29 years old, Pete became the second-youngest major in the town. He had been working on that position for eight years and displayed a perfect knowledge and skills as a major. In 2019 Pete launched his presidential campaign. Thanks to his charisma and intelligence, he gained grounds and stood in one raw with the most influential politicians.

The politician established himself as a moderate. He calls people for a generational change in political leadership. In 2019 he released a plan which would allow clean energy and agriculture and shield the country from the effects of climate change. The politician believes that manufacturing will be automotive in the nearest future. That's why he released a plan to protect people and tech companies. He doesn't support the idea of making college tuition-free. He supports a nationwide gun licensing system and a ban on the sale of so-called assault weapons. He also stands for the concept of "Medicare for all who want it." In 2019 the politician had released his first book.

Pete is a devout Christian. He said that religion has much influence on him. His parents baptized him in a Catholic church when he was an infant. Pete also attended Catholic schools. As an adult, the politician said he felt more Anglican.

The former major had a perfect skill in languages. He repeatedly displayed the knowledge of six languages on interviews. Besides, he plays piano and guitar. As a guest piano soloist, he performed with a Symphony Orchestra in South Bend.

In 2015 he came out as gay. Since 2015 he had been dating a junior school teacher. In 2018 the couple tied the knots. To support his spouse and travel with him around the country, Pete's husband decided to leave his job. His net worth is about $300,000.

In 2019 the politician released his first book. The political biography reveals his path to success as a political figure. Besides, he shared his feeling of making coming out and told his love story.