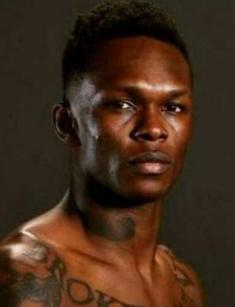 Israel Adesanya is a new star of MMA and UFC. The fighter of Nigerian descent represents New Zealand at international competitions. In 2011, the athlete made his professional debut in the octagon. Israel is a member of several fighting associations. He competes in the middleweight division and participates in kickboxing and mixed martial arts competitions.

Israel Mobolaji Adesanya was born in Lagos, Nigeria, on July 22, 1989. His childhood was no different from a thousand such stories. He lived in modest conditions, and his parents were always in search of a better life, so they changed their place of residence several times.

At the age of 12, Israel and his family left Nigeria and moved to New Zealand. Having settled in Rotorua, Adesanya first became interested in dancing. He was fond of this activity so much that he even thought about connecting his career with choreography, but his parents hampered it.

He began his path to martial arts because his peers bullied the boy. Israel was not popular with children, so he decided to defend himself. He was an immigrant, and at school, hectors often offended and mocked at him.

From an early age, the teenager practiced auto-training to get support. When anyone offended him, Adesanya stood in front of the mirror and spoke through his thoughts, motivated himself for the correct perception. Now the fighter uses this technique during training and fighting.

The parents saw that it was not easy for the boy to communicate with peers, and they encouraged his desire to go in for sports. Israel's first courses were taekwondo. But instead of success, the guy got an injury, breaking his arm. The mother decided that it was not the right time for such activities, and forbade her son doing it.

At the age of 18, Israel watched the movie Ong-Bak: Muay Thai Warrior and recalled his interest in martial arts. The guy chose Thai boxing. At that time, the family managed to move to Wanganui, where Israel realized that the time was ripe for decisive action. He packed up and left for Auckland, the largest city in New Zealand. He went to City Kickboxing, where the man met and began training under Eugene Bareman.

Having tried his hand at martial arts, Adesanya decided to pursue a professional career. He moved to China and became a kickboxer under the pseudonym The Last Stylebender, which was inspired by the cartoon Avatar: The Last Airbender. Having become an MMA fighter, Israel did not leave kickboxing but continued to participate in these tournaments.

It is interesting that Israel combined his striking technique with boxing and mixed martial arts skills. When he started to participate in boxing matches, the guy competed in the heavyweight division and amassed a record of 5-1, having been defeated only in his debut fight. By the way, the Nigerian's love of dancing did not go away, and he showed several dance steps to the delight of fans after each triumph.

In 2018, the fighter accepted the offer to join the UFC. He quickly became one of the leaders in the Middleweight division and delighted fans with brilliant victories. After 14 months of membership in the promotion, Israel Adesanya won the championship belt, having defeated Kelvin Gastelum.

In 2018, his credentials had three bright victories, and in the summer of the same year, the fighter faced Brad Tavares in the octagon. Throughout the battle, Israel dominated his opponent, which was also noticed by judges and experts. In the autumn, the fight with Derek Brunson took place. The athlete managed to defeat the opponent in the fifth round, and Adesanya became #6 in the UFC Middleweight rankings.

The athlete is compared with Jon Jones. Israel is flexible, and it has a long arm span, which gives an advantage over rivals. The fighter's career is developing rapidly. It took him only eight months to take the lead in the UFC. Even Conor McGregor failed to show similar results so quickly.

Israel Adesanya is a versatile person. In addition to sports and dancing, he is fascinated by other spheres of modern culture. He is a big fan of the comics and the Marvel universe. There are superhero tattoos, for example, the image of Deadpool, on the athlete’s body.

There is little information about the athlete’s personal life and religion. Israel has no wife and children, which is evidenced by his photos on Instagram. The guy devotes himself to career, training, competitions, and UFC events. He has a good sense of humor and the ability to laugh at himself.

In February 2019, Israel participated in the fight with the mature athlete Anderson Silva and won it. The experts said that not only the young fighter’s abilities but also the MMA legend’s lack of practice led to Adesanya’s triumph.

In April of that year, Adesanya won the fight with Calvin Gastelum for the interim UFC champion title. After the triumph, Israel became a contender for the battle with Robert Whittaker, which will be held in the autumn of 2019 in Melbourne, Australia.

In addition to his main activities, the fighter has managed to try his hand at a modeling business. He is the face of the fashion brand of glasses, and clothing designers also invite him to walk the runway at the fashion shows.

Israel Adesanya has an estimated net worth of around $750,000.