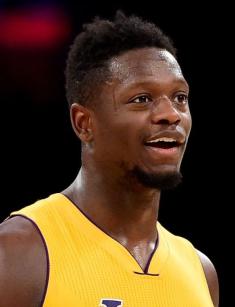 Julius Randle is a professional basketball player from the United States; he is known as a member of the New York Knicks. His youth-level achievements also brought him recognition in the sports industry: the athlete helped his team win the FIBA Americas U18 Championship in Brazil in 2012.

The would-be basketball star was born in Texas on November 29, 1994. His mother, Carolyn, had to raise her kids alone; there is no information about Randle’s father.

Carolyn tried to provide Julius and his elder sister, Nastassia, with everything they needed. The young man attended Prestonwood Christian High School and practiced sports gladly; he excelled in basketball and became one of the top five players along with his future colleague Andrew Harrison.

After graduation, the young talent entered the University of Kentucky and joined its team, the Wildcats. In 2013, Randle participated in the McDonald’s All-American Boys Game and continued to polish his skills; he was a candidate for the Naismith College Player of the Year.

Julius did not spend much time on the collegiate level: he always dreamed of playing in the NBA and felt enough strength to try himself there. He expressed his wish to participate in the 2014 draft in April.

The sportsman began his NBA career in the Los Angeles Lakers. However, the rookie season was not beneficial: Randle had a serious injury in the very first match against the Houston Rockets and had to recover till spring 2015.

Further on, the man’s performance was steady, despite the team’s losses from time to time. In 2016, Julius was one of the US Select Team that helped the national team prepare for the next Olympic Games.

Considering the athlete’s good stats, the Lakers did not want to trade him. In 2018, Randle became a free agent in July and signed a contract with the New Orleans Pelicans, but it lasted for a single season only.

In July 2019, the New York Knicks became the new home for the player. Randle had little doubts about it and felt enthusiastic about the new $63-million contract. The Knicks hope to raise their young players’ level while several free agents provide assistance and make the team more attractive for new talents.

Blake Griffin remains Randle’s primary opponent: they have met eleven times, and the former athlete’s results, including the defensive rating, have been better.

The athlete’s personal life has been happy: he married his long-time girlfriend, an entrepreneur Kendra Shaw, in 2017. The couple has a son together, Kyden.

Julius is a devoted Christian; he regularly goes to church and finds much support and inspiration in his beliefs. Fans can learn the latest news about their favorite on his verified Instagram account; more than 830 000 people follow him there.

In 2016, the man had an endorsement deal with Mountain Dew, producing soft drinks; fans could see him in several commercial videos.

The beginning of 2020 was challenging for Randle: he had to go through his beloved grandmother’s death. The woman always encouraged Julius to play basketball and supported all his fantasies, so her passing was a tragedy for the sportsman. Nevertheless, he pulled himself together and became the hero of the recent match against the Miami Heat: his final score brought the Knicks a beautiful victory; the score was 124-121.

Today, fans are looking for new achievements of their favorite; they hope to see him in an All-Star game one day.