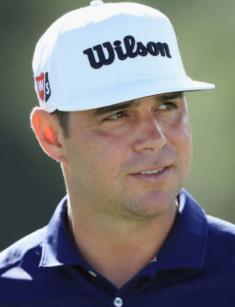 Gary Woodland is an American professional golfer performing on the PGA Tour. He is currently ranked 12th in the Official World Golf Rankings. Read below some facts of his life!

Gary Woodland was born in Topeka, Kansas on May 21, 1984 to the family of Dan and Linda Woodland. Future sport star studied at Shawnee Heights High School in the suburb of Tecumseh. In high school, Woodland played basketball (his team won two state titles) and baseball throughout the whole year. He played golf as well, but he described it as his «3rd sport.»

Woodland described the decision to put golf above all else as challenging, but he added that his game improved greatly because he was only dedicating his time to one sport.

Once in an interview, Woodland shared that his experience playing college basketball helped prepare him for golf.

Having graduated from the high school, he entered Washburn University – he received there a basketball scholarship but left after his freshman year to attend the University of Kansas in Lawrence on a golf scholarship. He studied sociology. Apart from academic successes, Gary was a perfect college sportsman with high results.

So, Gary Woodland grew up in Kansas, where basketball is king and he also liked this kind of sport.

Gary Woodland took part in several tournaments on the Nationwide Tour in 2007 and 2008. At the end of 2008 season, the player entered the Qualifying school for the PGA Tour and finished in a tie for 11th, which was good enough to earn him a full card to play on the PGA Tour in 2009. In his debut season, the sportsman made only eight cuts in 18 matches. Later he injured his shoulder, and he had to miss some weeks of games.

In 2010 Gary Woodland dedicated himself to the PGA and Nationwide Tours. He continued to struggle for his best form but did not record a single top ten finish on either tour.

In 2011 he was beaten in a playoff at the Bob Hope Classic at the beginning of the season. Nevertheless, two months later Woodland became the winner of the Transitions Championship, defeating Webb Simpson by one stroke.

In 2013, Woodland won the Reno-Tahoe Open – it was his second PGA Tour victory.

Earlier that year, he was named the winner the Waste Management Phoenix Open in a playoff over Chez Reavie and Amy Bockerstette to notch his third PGA Tour win. After the win, Woodland was ranked 25th in the World Rankings, the highest spot he's ever held.

Sportsman’s fans remember his match with Rory McIlroy for the 2015 WGC-Cadillac Match Play Championship. Although Woodland was defeated, he further proved he was capable of going toe-to-toe with the very best in the game.

February 2018 was marked by Woodland's PGA victory – he beat Chez Reavie again. Woodland got to the fifth place in the season's FedEx Cup standings.

In January 2019, Woodland held the lead entering the final round at the winners-only Sentry Tournament of Champions at Kapalua Resort in Maui, Hawaii. He shot a five-under-par 68 but still was beaten by champion Xander Schauffele who shot a course record-tying 62.

Performing at the U.S. Open in June 2019, Woodland held the 54-hole lead at Pebble Beach Golf Links. Once, he shot a 2-under-par 69 for 271 (−13), which gave him a three-shot margin over the runner-up, two-time defending champion Koepka at the Bethpage Black. Woodland became the fourth champion in U.S. Open history who was double-digits under-par. This victory was his first major and his sixth professional win. In his previous thirty starts in majors, Woodland had only carded two top-ten finishes, both in the PGA Championship (2018, 2019). The win at the U.S. Open helped him move up from 25th to 12th in the Official World Golf Ranking.

Gary Woodland’s net worth is evaluated at $12 million.

Since 2009, Woodland has played in 28 major tournaments, all four of them at least six times. The player has missed the cut eight times and finished 50th or worse in six majors. Gary Woodland has one top-25 in the Masters, U.S. Open, and Open Championship, and two top-25 finishes in the PGA Championship.

Gary Woodland has a wife, Gabby Granado Woodland and a son Jaxson. Nowadays they live together in Delray Beach, Florida.

Recently, the couple announced they were expecting twin boys in August which is especially significant given they lost one of their twin babies during their 2017 pregnancy.

The spouses got married in 2016 on the beach in Turks and Caicos, per Golf Digest.

2017 was a difficult challenging time for the couple as Gabby later gave birth to their son, Jax, after losing one of the babies. Jax was born ten weeks premature at just three pounds. Gabby and Gary are thrilled parents as Jax has grown up to be a healthy child. Having won the 2018 Waste Management Phoenix Open, Gary shared the moment with his son and wife. Gary was also thinking about the daughter that the couple never got to meet.

Gary was paired with legendary MLB player George Brett at a Web.com Tour event several years ago. Gary struck up a friendship with Brett, and the former slugger invited him, along with his family, to a Super Bowl party. George's dad, Dan, is a big Royals fan and was thrilled to meet him.

Some years ago, Woodland was looking for a house to his family. He was offered to buy expensive homes of Jupiter (Fla.), where the likes of Tiger Woods and Rory McIlroy live, but eventually settled in the far cheaper Delray Beach. Both are in Palm Beach County, but Delray is more than a half hour south of Jupiter. Both are about an hour to 90 minutes away from Miami.

In his career, Woodland has partnered with the companies Under Armour and Puma.

“My grandfather was in the military, and I’ve been part of the Folds of Honor Foundation since 2009, so having the opportunity to wear PUMA’s Volition America collection is the perfect fit for me.”

There are lots of videos on YouTube where Woodland shows his skills – perfect hole-in-ones, swings down the line.