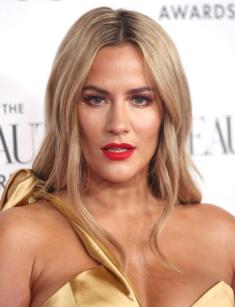 Caroline Flack is a British actress and TV and radio presenter. Besides, she is famous for her victorious performance in Strictly Come Dancing in 2014.

The future TV personality and her twin sister, Jody, were born in November 1979 in Enfield, England. The children were close; Caroline shares their childhood photos sometimes.

The movie Is Harry on the Boat? was Flack’s first appearance on TV. However, she found a niche for herself soon: TV shows.

Throughout her career, Caroline has worked on many famous programs as a commentator and host: Eurovision Song Contest 2008, Gladiators, The Xtra Factor, The X-Factor, Love Island, and so on. Besides, Flack co-presented the radio show Sunday Mornings on Heart Network in 2016.

The number of the artist’s fans increased in 2014, when she joined Strictly Come Dancing as a contestant. The Russian dancer Pasha Kovalev was her partner. The audience welcomed the pair and gladly voted for them throughout the whole season, making them the winners on December 20, 2014.

The woman’s personal life has been quite rich. In 2009, she was dating Prince Harry, but they split up soon: Caroline felt like she was seen not as a person but, rather, only a tail to her royal fiancé. Thus, the couple did not engage.

The next year, 17-year-old Harry Styles (One Direction) became Flack’s boyfriend. At that time, the 31-year-old woman was working on The Xtra Factor. The generation gap made the difference, though, and the lovers broke up.

In 2013-2014, the star was in a relationship with the manager Jack Street; rumors had it the man cheated on Flack. They reunited in 2015, and the paparazzi spotted a beautiful engagement ring on Flack’s finger. However, the cheating scandal recurred; the couple broke up for good.

There were many speculations about the host’s affair with a Love Island contestant Mike.

The relationship with Andrew Brady was stormy: they had quarrels and made amends several times. After separation, Brady called their romance “toxic” and said he felt relieved after things were over.

Caroline’s current boyfriend, Lewis Burton, has a different opinion. He has described her as “loyal” and “kind” when the recent abuse scandal erupted.

On Friday 13, 2019, the media spread the information about Flack’s arrest for physical violence after she presumably had a conflict with Burton.

The police confirmed the charges; Lewis was delivered to a hospital, but his injuries were minor. The cause of the incident is unknown – the couple was getting on well just days ago. Whether the arrest will affect Flack’s work on Love Island scheduled for January 2020 is uncertain.