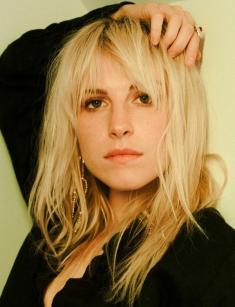 Hayley Williams: biographyHayley Williams is a singer, songwriter and musician who is most known as the vocalist of the pop punk Paramore music band. Plus, she's a keyboardist and entrepreneur.

Hayley is American. She was born on December 27, 1988, in Meridian, Mississippi. When she was 13 years old, her parents divorced and she relocated to Franklin, Tennessee with her mom, Cristi. Her dad's name is Joey. The star has two younger half-sisters, Erica and Mckayla.

In her new school in Franklin, the future star met Josh Farro and Zac Farro. She started to attend vocal classes and met Jeremy Davis when trying out for a local funk cover band, The Factory. Together with these guys, she formed the Paramore band in 2004.

The name of this collective stems from the maiden name of the mom of one of Paramore's first bass guitarists. It resembles the "paramour" noun which stands for "secret lover".

Atlantic Records representatives discovered Hayley in 2003. They offered her a contract as a solo pop singer. She rejected it because she was dreaming of being a part of a rock band. The managers agreed with her. In 2005, the group's inaugural album saw light on the Fueled by Ramen imprint. The target audience of the band perceived this niche label as a much cooler alternative to the Atlantic major.

Since then, the collective has released five studio albums, two live albums, five EPs and over 20 singles. Hayley is a soprano with a four-octave range. She is capable of singing in a whistle register.

Today, the group includes Hayley, Zac Farro and Taylor York. The others left because they felt the project became too mainstream.

Hayley is famous for her signature red hair. In 2016, she registered a hair dye business Good Dye Young. Its products are cruelty-free and vegan.

This celebrity had partnership deals with MAC Cosmetics, Apotheke Co. and Tea Huntress. She gladly supports charitable initiatives, such as the PINKTOBER campaign by Hard Rock Cafe.

In 2007, the star began a romantic relationship with Chad Gilbert from New Found Glory. In 7 years, they got engaged and walked down the aisle in 2016. Their official marriage lasted for a few months only because Chad had too many lovers.

Hayley began to suffer from depression long before her divorce. In 2015, she had to take a break from music. She had suicidal thoughts and underwent therapy.

In October, 2022 it became known that Hayley is dating her Paramore bandmate Taylor York, the couple officially confirmed this information.

She was nominated for: