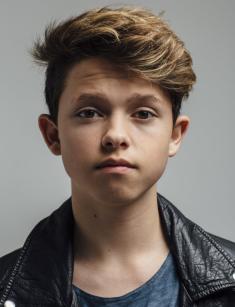 Rolf Jacob Sartorius is a young American Internet star and singer who succeeded to come to prominence in Social Media – due to posting quality videos on Musical.ly and TikTok. Jacob gained recognition quite recently. So, in 2016 the celebrity came to the world of show-business by releasing his debut single «Sweatshirt» which got to the Hot 100 charts in the United States and Canada. That year Sartorius was named the 9th most searched musical artist.

2017 was marked by Jacob's debut extended play called «The Last Text.» The collection consisted of 8 top songs. It became popular in the United States, Canada, Scotland, New Zealand, Ireland, and Australia. Besides, the same year young celebrity toured across America for the first time. The tour’s name was «The Last Text World Tour.» Shortly after Sartorius' fans could see his next EP entitled «Left Me Hangin'.» In November 2018, the singer pleased the fans by releasing the third EP «Better With You.»

It was only a small part of Jacob's biography. Are you yearning to know more? Let's emerge in Jacob Sartorius' way to success right now!

Jacob Sartorius' birthplace is Tulsa, Oklahoma, the United States. He was born there on October 2, 2002, and was given to an orphanage. He was adopted shortly after and moved to Virginia with new parents. Sartorius passed his childhood in Reston, Virginia.

Sartorius was lucky to have been adopted by these people. So, they don't have financial problems and can afford everything he needs to live well. Besides, Jacob's parents have always given him support and love. Sartorius has often referred to them for advice.

At an early age, Jacob found the passion of his life – singing and performing on stage. The parents supported him and encouraged him to develop his talent. With their help, Sartorius has written his own lyrics.

As a 7-year-old kid, Jacob began performing in musicals. It became the reason for children around to bully him.

Having got acquainted with the Internet and Social Media, Sartorius published his first online-video to Vine – he was only 11 years old. There Jacob speculated about bullying and how to avoid it. The video went viral – it noted the beginning of his fame on social media. The same year, Sartorius installed Musical.ly where also became popular. He published there lip-syncing videos and was named one of the best app's stars with more than 9 million followers.

As Sartorius became famous, it made his mates stop bully him. In his future admissions, Jacob confessed he had changed three schools in 2015 cause his classmates verbally attacked, pushed, and teased him. Social Media helped him escape from bullying. Jacob himself once said, "Before Musical.ly, I wasn't the most outgoing. The app helped me goof off. It's like no one is watching beside the camera."

In his accounts, Sartorius once admitted he had been seeking therapy and taking anti-depressant medication since he was 11 years old.

Sartorius is currently dating actress Millie Bobby Brown, a Spanish-born British actress. She rose to prominence for her role as Eleven 'El'/Jane Hopperin the Netflix science fiction horror series Stranger Things, for which she received a Primetime Emmy Award nomination for Outstanding Supporting Actress in a Drama Series at the age of 13, becoming one of the youngest nominees in Emmy history.

The two started going out in October 2017. In April 2018, there were rumors that Jacob cheated on Millie, but the two are still going strong.

They have broken up but reunited again. A month after Millie effectively announced her back-on romance with Sartorius, she shared another photo of her and her boyfriend getting close, posting a pic of the two of them kissing on the beach. Some social media users criticized Brown for engaging in such a serious romance at her young age.

Interestingly, the couple was shamed by Ariana Grande. It is known, Ariana Grande has a sassy sense of humor. Apparently, Brown and Sartorius aren't her big fans because the couple had some conflicts with her.

In May of 2018, Brown posted an Instagram photo of her and Sartorius locking lips with the words "Moonlight with him." Grande commented the photo: "I wasn't even allowed to leave my house till I was 20." Many fans agreed, and Brown promptly deleted the post.

Millie Bobby Brown and Jacob Sartorius have a lot in common. They're talented, they're famous, and they're richer than most adults. They also apparently have a thing for actors.

Brown isn't the only actress Sartorius has been romantically linked to in the past. He was rumored to have dated Luna Blaise, who starred in his «Sweatshirt» video, and Jenna Ortega (from «Stuck in the Middle»), who starred in his video for «Chapstick.»

Brown also might have a thing for actors, but it could be just platonic. The young starlet admitted in 2017 that she has had sleepovers nearly every weekend with Stranger Things co-star Noah Schnapp. At the time, they were 13 and 12 years old, respectively.

In 2019 Sartorius took his braces off.

After Sartorius got lots of fans and gained recognition through Social Media, he was offered to sign a contract with T3 Music Group. The celebrity accepted it and published his first top hit «Sweatshirt» on May 3, 2016. The track reached No. 90 on the US Billboard Hot 100, and No. 81 on the Canadian Hot 100. Sartorius sang the song for the first time in Baltimore on May 7 during the Magcon tour, a tour where fans can meet and interact with Internet personalities and see them perform. Such a fast way to success made «Business Insider» call Jacob Sartorius «the next Justin Bieber.»

When the tour was closed, Sartorius pleased his fans by the tracks «Hit or Miss», «By Your Side» and «All My Friends.» The first one debuted at No. 72 on the US chart – it is his highest charting single to date. In 2016 Jacob embarked on the All My Friends Tour, a solo mini-tour where he visited with concerts six cities.

In two months, the celebrity announced he would embark on The Last Text World Tour where he would visit seven countries in 2017 as a support of his debut extended play «The Last Text.» Sartorius' EP was released on January 20, 2017.

In Summer 2017 Sartorius was signed to RCA Records. On October 6, his first label called «Left Me Hangin'» was released. On December 1, 2017, the world could listen to Sartorius' debut Christmas song.

In March 2018 Jacob was a participant of the Los Angeles March for Our Lives protest and spoke at the event.

On November 1, 2018, Jacob Sartorius released his new EP «Better With You.» Before, he had not announced its probable release. Unfortunately, the project was not of a high critical or commercial success.

Besides, Jacob has his own clothing line. So, he sells jeans, jerseys, crop tops, jackets and many other things.

Sartorius’ net worth is evaluated at $1 million. Speaking about his salary, he gets approximately $500,000 per year.