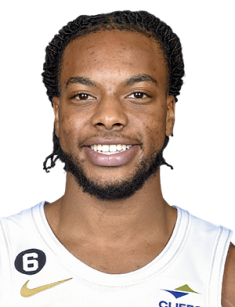 Darius Garland, who was born on the 26th of January 2000, is an Indiana-native American basketball player. He currently plays in the NBA for the Cleveland Cavaliers. Darius is of American nationality and black ethnicity.

Darius is also known for playing basketball for Vanderbilt. He joined the NBA back in 2019.

Darius was raised in a well-established American family that lived in Gary, Indiana. He spent his childhood playing basketball in high school and then in college. He went to the Brentwood Academy in Tennessee, and then, in 2018, he joined Vanderbilt. According to his words, Darius first started playing basketball when he was five, so it quickly became his passion. He and his family moved to Tennessee from Indiana when he was in the 6th grade. His dad, whose name is Winston, is a former NBA player; later, he started serving in the US army. Darius' mom is Felicia. He was raised along with five siblings: one older sister, Kacie, and the rest Desmond, Miquel, Cody, and Hilton.

His basketball career started when Darius played for a local team in high school and then in college. As of the start of the 2018–19 academic year, Darius was the top recruit to ever commit to Vanderbilt. Only he made the SEC's preseason all-conference team of freshmen. On November 6, 2018, he scored 24 points to lead all scorers in his first collegiate game. Darius made the decision to leave Vanderbilt on January 22, 2019, to focus on his injury recovery and NBA draft preparation. Later, Darius was chosen as one of the 77 participants to attend the NBA Draft Combine. He did, however, leave the gathering early on May 15, believing he had been guaranteed a spot in the NBA draft lottery.

However, his professional career began immediately as the Cleveland Cavaliers picked him as the fifth overall choice in the 2019 NBA Draft. The Cleveland Cavaliers made the announcement that they had signed Darius on July 3, 2019. Garland entered the NBA on October 23, 2019, making his debut. He also became the first player born in the 2000s to play in the NBA during this game, making history. He had a then-career-high of 37 points on April 4, 2021, and seven assists in a 125-101 victory. Darius inked a five-year, $231 million designated rookie agreement with the Cavaliers on July 9th, 2022.

Darius is a low-key basketball player who prefers not to talk much about his personal life. Anyway, he has an Instagram account with over 450k followers. There he shares pictures of himself and his family, makes stories, and sometimes starts live streams. Currently, Darius is single and has never been in a relationship.

Here is the list of achievements Darius has received throughout his basketball career: