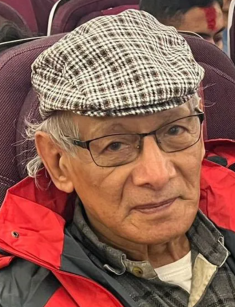 Hotchand Bhawnani Gurmukh Sobhraj, who is known simply as Charles Sobhraj, is an Indian-Vietnamese thief and serial killer. He was born on April 6, 1994. Being French by nationality, he is also known as the "Bikini Killer," "The Serpent," or "Splitting." Throughout his life, he killed at least 12 people (these are confirmed cases), while his total victim count is possibly 30.

Charles was released from jail in 2022. Also, he was often portrayed in several books and even in a BBC documentary movie, later streamed on Netflix.

Charles was born in the family of Vietnamese saleswoman Tran Loang Phun and Indian Sindhi businessman Sobhraj Hatchard Bavani, who lived in Saigon. At birth, he received the name Gurmukh. His parents divorced, and his father left the family. Initially stateless, Charles was adopted by his mother's new partner, a lieutenant in the French army stationed in French Indochina, Alphonse Darreau. Throughout his childhood, Charles often moved with his family from Indochina to France and back. As a teenager, he began committing minor crimes and received his first prison sentence (for burglary) in 1963, having served it in Poissy prison near Paris. To escape from the arrests that awaited him in France, he settled in Asia. He frequently stole there, mostly jewelry, and then began to kill.

In the 1970s, Charles hunted Western tourists throughout the Hippie Trail in Southeast Asia, as he had a wild hatred for this subculture. Charles mainly stole and killed in countries such as Thailand, Nepal, Pakistan, India, Malaysia, France, Afghanistan, Turkey, and Greece. In July 1976, in New Delhi, Charles tricked a tour group of French graduate students into drugging them by giving them poisoned pills, which he said were a cure for dysentery. When the drugs took effect faster than Charles expected, the students began to lose consciousness. Three students caught the moment and contacted the police, which led to the arrest of the killer. During the interrogation, Charles' accomplices, Smith and Ezer, quickly confessed. Charles was charged with the murders and then went to Tihar Jail in New Delhi to await an official trial.

Charles was imprisoned in India from 1976 to 1997. After his release, he lived in Paris. Then he returned to Nepal in 2003, where he was arrested, tried, and given a life sentence. In prison, Charles, with the help of precious stones, brought cavities in his body, bribed guards, freely hired and dismissed lawyers, and rigged the whole court for himself. In prison, he led a luxurious life, making friends with guards and prisoners. He was often visited by journalists, and although he spoke openly about his murders, he never directly admitted them. In 2003, he was sentenced to life imprisonment, but at the end of 2022, he was released.

Interestingly, in 2010, Charles got married right in prison. His wife was his translator from the Indian-Nepali language, Nihita Biswas. She was the daughter of a lawyer, and she was only 20 years old at the time. Nihita stated in the media that his captivating eyes and French charm drew her in. And in 2017, when Charles urgently needed open-heart surgery, she became a donor and donated her blood.

Although Charles did terrible things, he left a great influence on his personality. Many books have been written based on his life. For example, his lifestyle is described in such books as Serpentine (1979) by Thomas Thompson, The Life and Crimes of Charles Sobhraj (1980) by Richard Neville and Julie Clarke, and the section titled "The Bikini Murders" by Noel Barber in the Reader's Digest Collection Great Cases of Interpol (1982). Documentaries have been made based on some of the books. The most famous of them was produced by the BBC in 2021. The main role was played by actor Tahar Rahim. Later, this documentary became available for viewing by subscription on Netflix.