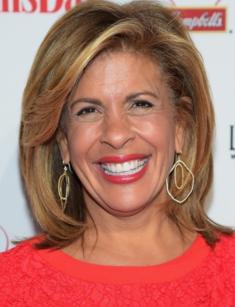 She is a skilled journalist and co-host of morning TV shows. Her multiple talent and excellent education let her try herself in interdisciplinary spheres. Thus, she proved to be a gifted writer who regularly releases books. She has already published six books for adults and two children's books. Her books tell thrilling stories from both her and people's life.

Since 1998 the journalist's fan base has impressively grown. As a result, Honda became a lovely media personality. She has got a brave heart. The journalist struggled against breast cancer and made her story open for each people. Fortunately, Honda is cancer-free now, but she continues to talk about this hard-hitting theme. Besides, she doesn't hide that she is a lonely mother of two adopted daughters. In 2019 she pleased her fans announcing her engagement.

She was born in the family of the Egypt immigrants on August 9 in 1964. In her early childhood, her family lived in Egypt, as well as Nigeria. She has got a brother and a sister. Her father was a fossil energy specialist, while her mother worked on the Library of Congress. She was good at school; a skilled girl was called a homecoming queen. In the university in Virginia, she studied broadcasting journalism.

After her graduation from the university with a degree in broadcasting journalism, she immediately began working on the virtual and digital channels. From 1988 to 1998, Honda repeatedly changed the channels to spread her activity and gain more experience. In 1988 the journalist became a member of NBC news. She earned a huge fan base for her personality as a co-host of Today's a.m. time slot. Besides, she established herself as a skilled journalist. The fame and recognition let Hoda gather a good fortune. Her net worth is $12million.

She advocates breast cancer awareness. In 2007 her story of the struggle against breast cancer was displayed on the screen. She had to undergo surgery and mastectomy. Finally, Hoda announced that she was cancer-free. However, she continued to use her story to attract people's attention to this problem.

In 2005 the media personality married on the tennis coach Burzis Kanga. Three years later, the couple split. In 2013 she was in a relationship with Joel Schiffman, a financier from New York.

In 2017 she decided to adopt a baby girl. Two years later, she took the other baby girl. The TV host announced her engagement on November 25 in 2019. She had been in a relationship with her fiancée since 2013. Her fiancée is Joel Schiffman. She preferred to keep her private life secret. However, she had to introduce her boyfriend to the audience when the journalists published photos of the couple on the beach.

She proved to a skilled writer who repeatedly releases books. Her first bestseller was published in 2010. This work was her autobiography. Her next book was released in January 2013. The book tells about six humans who were involved in life-changing incidents. The author identified those people and then revisited them a decade later.

In 2016 she released another book. It consists of inspirational stories. In the center of the book are people who found their calling in unexpected circumstances. In autumn 2019, the writer released the memoir, where she shared her personal experiences and relationships. She gathered 365 inspirational sayings and added her quotes. Besides, Hoda has written two children's books in 2018 and 2019.