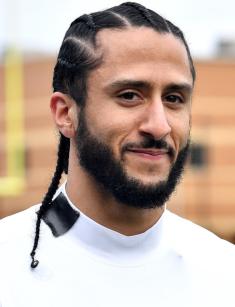 Colin Kaepernick is a professional football player from America who used to play for the San Francisco 49ers. Today, the athlete performs as a free agent. He is famous for his social activism, including the US national anthem protests.

The beginning of the future athlete’s life was not easy. The boy’s biological father was black; he dashed off when he learned about his white girlfriend’s pregnancy. 19-year-old Heidi Russo left her son, and the boy was adopted by Rick and Teresa.

Growing up was challenging for Colin. He got on well with his parents and knew about his adoption, but peers kept bullying him for his background.

When Kaepernick turned four, the family moved from Wisconsin to California. He went to John H. Pitman High School and showed good academic results. Colin began to play football at eight; his talent manifested itself soon, and the teenager won the MVP title at the Central California Conference. Besides, the young man was fond of basketball and baseball.

Although Kaepernick was offered several scholarships for his baseball achievements, he was determined to play football. He entered the University of Nevada in Reno and joined its team soon.

2007 brought the collegiate debut as a back-up quarterback. The sportsman’s performance was always stable, whether his team lost or won. During his second year, Colin gained the WAC Offensive Player of the Year. By the graduation, he could boast excellent stats: 10 098 passing yards, 82 passing touchdowns, and 24 interceptions.

In 2011, the young man took part in the NFL Draft; he was selected by the San Francisco 49ers. The first season brought only the back-up job for the rookie, but Kaepernick did not get upset and kept mastering his skills. The next year, he became the club’s number one quarterback.

Following several significant victories, the coach Jim Harbaugh appointed Colin the starting QB. Some experts criticized the decision, but Kaepernick’s performance washed away all doubts soon: most games were successful for the 49ers. In 2014, he signed a $126 million agreement with the team.

In 2015-2016, the athlete’s luck was not so good. With a new coach, he lost his leading positions and suffered several traumas, missing many significant games. In the last season with the San Francisco 49ers, Kaepernick participated in 12 matches and had 2 241 passing yards, 16 passing touchdowns, and four interceptions. In 2017, the sportsman became a free agent.

The athlete is famous not only for his sports achievements but also a firm social attitude. When Kaepernick was still a member of the San Francisco 49ers, he knelt while the country’s anthem sounded, although players were supposed to stand. Later, Colin explained his action: he did not want to honor the system where racial prejudice and other bitter issues were being ignored.

Other NFL athletes joined their colleague; protests were spreading quickly. In 2016, Kaepernick created the Know Your Rights Camp to raise legal awareness among people.

In 2018, Nike presented a commercial video starring Colin Kaepernick; it was immensely popular, as well as the company’s black jersey.

In 2019, Cardi B refused to appear at the Super Bowl show to support Kaepernick. The rapper said: “I got to sacrifice a lot of money to perform. But there’s a man who sacrificed his job for us, so we got to stand behind him”.

The sportsman started dating the TV host Nessa in 2015; they often share photos together.

The quarterback has 13 tattoos, many of which are about Colin’s faith. He is a devoted Christian and finds courage and strength, thanks to God’s support.

Today, the sportsman continues to protect people’s rights. One can see many posts encouraging everyone to struggle for equality on Instagram and Twitter.

Rumors have it the athlete might join the Denver Broncos or the Cleveland Browns; the Colts may want him, too. In fall 2019, the NFL invited teams to Kaepernick’s workout.