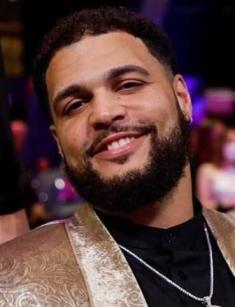 Michael Lynn Evans III who was born on August 21, 1993 is an American professional football player. After playing college football at Texas A&M, he became a wide receiver for the Tampa Bay Buccaneers of the National Football League (NFL). He and Chris Godwin are considered the top wide receivers of the team.

The NFL star was born and raised in Galveston, Texas. He attended a local high school. Evans comes from a family with a tragic background. Mike's mother's name is Heather, and she got pregnant with him when she was just fourteen years old. His father, Mickey, was abusive toward the player's mother and had been killed by her brother when Mike was just nine years old. Mike's uncle, Sam, is currently serving a life sentence. Evans says that he forgave his uncle for the murder. The Tampa Bay wide receiver also has a sister.

In high school, Mike played football and basketball. He was also a track star. Evans was eventually recruited by Texas A&M University and joined its football team, Aggies. Mike played for the team from 2011 until 2013. His total college football stats are 151 receptions for 2,499 yards and 17 touchdowns.

The wide receiver decided to forgo his final two years of eligibility and entered the 2014 NFL draft. It was rumored that the Philadelphia Eagles considered picking Mike and another wide receiver, Brandin Cooks. However, Evans was eventually selected by the Tampa Bay Buccaneers team. He signed a four-year, 14.6 million dollar rookie contract. Mike's total NFL career stats are 657 receptions for 10,003 yards and 78 touchdowns.

He is currently one of five active players with at least 10,000 receiving yards.

According to Sporting News' rankings, the player is number 10 on their list of the NFL's 30 best wide receivers. Evans surpassed such players as Allen Robinson and Amari Cooper, who ranked 21 and 30 respectively.

In 2016, Mike married his college girlfriend, Ashli Dotson. The couple met in 2014 and have been inseparable since then. Evans's wife is a lifestyle and fashion blogger. She is also involved with various charity projects. Mike and Ashli have two children together. The Tampa Bay player also has a daughter from a previous relationship.

In January 2022, the wide receiver made news after he tried to calm down his teammate Antonio Brown, who had a meltdown on the field and subsequently left the team. Evans considers Brown "one of the best to ever play" and wanted to prevent his scandalous departure from the team.

The wide receiver has set up 6 NFL records, including most consecutive seasons of 1,000 yards receiving to begin a career and youngest player with 200 or more yards in a game.