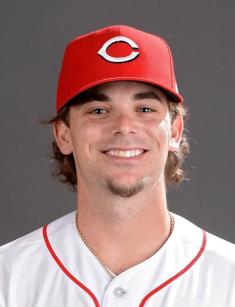 The Ohio native, Scooter Gennett appeared in professional baseball in 2009, as a rookie of the Milwaukee Brewers. Scooter was playing for the Minor league teams in 2009 – 2012, for the Brewers in 2013 – 2016, and for the Reds in 2017 – 2019. In summer 2019, Scooter joined San Francisco Giants. He plays at a second baseman position. In 2018 he was selected for All-Star game appearance. Also, he is married. Gennett has a net worth of $5 million, including all of his properties and earnings.

Gennett was born to his parents in Cincinnati on May 1, 1990. Ryan became interested in baseball from an early age, as his father was involved in professional baseball, being a Houston Astros’s scout. Ryan grew up with his sister. When he was five years old, he nicknamed himself.

Ryan didn’t like to follow the traffic laws. While his mother was driving, he usually unfastened the belt and started fooling around. Once, his mother was so angry that she took him to a police station, wanting to scare the little boy. When the policeman asked Ryan’s name, the young violator didn’t give his real name. He said to the policeman, “Scooter”. It was the name of Gennett’s favorite cartoon character. His mother was shocked, as she didn’t know such a character.

When Gennett was nine years old, his dad asked him a question, which changed the direction of Ryan’s young life. Dad asked how serious Ryan was about baseball. He gave the right answer, and their family moved to Florida, where he entered the Riverview High School.

Later he moved to the Sarasota High School and started playing baseball all year round. Showing good stats, he was a .440 hitter as a junior and a .470 hitter as a senior with the Sailors and was on the radar of Milwaukee scout Tim McIlvaine, a cross checker based out of Tampa. Scooter graduated from Sarasota in 2009. He refused college and declared for Draft.

On June 5, 2013, Scooter appeared in his first MLB game. Next two seasons were rather good for Gennett, but he found problems against left-handed pitching. In 2015 he showed dismal start to the season. It included a 15-day DL stint after slicing his hand while showering in Pittsburgh. That’s why the Brewers sent Scooter to Triple-A to get his swing and his defense back.

His first big deal, Scooter signed in December 2016. He agreed to one-year $2.5 million contract with Brewers, avoiding arbitration. However, in three months, the Cincinnati Reds claimed Scooter off waivers from there. In exchange, they offered another second baseman and a utility player off the bench. Gennett played four seasons with Milwaukee. He batted .263 with a career-high 14 homers and 56 RBIs in season 2016, but the Brewers decided to go with another player at second base in season 2017.

When Scooter joined the Reds, he didn’t expect to be given the No. 4 jersey. The number previously belonged to Brandon Phillips, a beloved player in Cincinnati. Gennett himself was his longtime fan. So, it was a bit awkward to wear the great player’s number at his stature. Then he said:

“When I came over, I didn’t expect to get that number. It wasn’t something that I picked. But unfortunately, that was my only option, what I was told.”

He said he tried to get the number changed but found out that the process was difficult.

Gennett's breakout season came in 2017 when the undersized infielder launched 27 homers in just 497 plate appearances. On June 7, 2017, the Cincinnati native put on the greatest home run show in franchise history. He tied a major league record with four homers, becoming the 17th player to accomplish the feat, and matched the club mark by driving in ten runs during a 13-1 victory over the slumping St. Louis Cardinals.

Gennett's 17 total bases also were a team record. The game’s highlights were filled with his actions. Scooter followed up his 2017 season with a strong 2018, hitting .310/.357/.490 while playing an above-average second base. Also, he was named to All Star roster. In January 2019, Scooter signed a one-year $9.7 million contract with Cincinnati, avoiding arbitration. However, he battled an injury for the first half of the year.

Initially, he was going to return in late February, but after some games, the Reds revealed that the groin injury Scooter suffered while playing 2B defense was a serious one, one that would have him sidelined for 8-12 weeks. In 2019 he hit .212 with a .232 on-base percentage and .258 slugging percentage in just 69 plate appearances.

On June 1, 2019, Dayton Daily News announced that Scooter was expected to start a minor-league rehab assignment. His teammates couldn’t wait for the day the diminutive baseball player would walk into the clubhouse and see his name on the lineup card. After several minor league appearances with Daytona Tortugas and Louisville Bats, Gennett returned to MLB.

Scooter Gennett wore a red tank top to a pre-game media interview session before his first game after recovery. There was no Superman cape visible anywhere. Social media was awash with brash statements about how Gennett’s return to the lineup was destined to turn the season in favor of the Cincinnati Reds that the team would score runs and take names later.

While optimism was an excellent trait, realism might enter at some point. And the reality was that the Reds had more problems than the second baseman that had missed the first half of the season. One man, one player, was not going to turn the Reds into The Big Red Machine reincarnate. On July 31, 2019, Gennett agreed to join the San Francisco Giants. The Reds got cash considerations.

As of 2019, Scooter Gennett has an estimated net worth of over $5 million with an average salary of $9.7 million annually. Scooter was one of the best-paid players of Cincinnati Reds. He stood in the 4th place in the list of salary ranking of Reds while Joey Votto stood in the top position with an annual salary of $25 million.

Moreover, Scooter was the 129th best-paid player in 2019 of MLB. Scooter, being a popular athlete, was linked with different renowned brands. However, he hasn't dropped a single hint about his endorsement deals in the media yet. Reportedly, he is earning a good sum of money from the deals that he is associated with.

Moreover, he has a good collection of cars. Specifically, he is the owner of Ford Power struck truck and also regularly post about his seven seated extraordinary truck in one of his social media account.

Scooter is married to his longtime girlfriend, Kelsey Gennett. The couple met in high school in their sophomore year and started dating in 2007. Kelsey and Scooter were engaged in 2014. They finally tied the knot in 2015. They had a unique wedding in a cave, where they took their vows. As of 2019, the two do not have children.