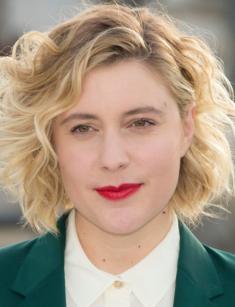 Greta Gerwig is an American director and actress who became incredibly popular in the late 2010s thanks to her movies Lady Bird and Little Women; she has had several Oscar nominations.

The future artist was born on August 4, 1983, in California. The girl’s mother worked as a nurse, and the father was a credit professional; she grew up with a brother and a sister.

Young Greta was fond of fencing, dancing, and art; she created her first scripts at school. After graduation, she continued her education at Barnard College and studied philosophy there, earning her degree in 2006.

Gerwig was going to devote her life to playwrighting but failed to get accepted to the program she wanted and switched to acting soon. She debuted in the 2006 mumblecore indie LOL; Hannah Takes the Stairs and Baghead came out later.

2008 brought the first contract as a director: Greta was working on another mumblecore, Nights and Weekends.

Greenberg (2010) and Frances Ha (2012) with Adam Driver marked the first mainstream success, and popular works followed: Mistress America, The Village Bike, Maggie’s Plan. In 2016, fans saw their favorite in the biopic Jackie about the US First Lady Jacqueline Kennedy.

In 2017, the director emphasized in her interview she wanted to make movies about women. She knows well what she is talking about: most of Greta’s projects are based on her personal experience; she portrays strong female characters and their formation.

Gerwig encourages actors to insert their personalities to characters but allows little improvisation; she prefers to keep most lines the way they are in a script. One can hardly find a villain figure in Greta’s projects – there is always room for empathy.

The woman met Noah Baumbach thanks to the drama Greenberg. At that moment, he was married to the actress Jennifer Jason Leigh; their divorce occurred in 2013. However, Noah and Great became partners two years before that; they have made one of the most beautiful couples in Hollywood. The directors are not married officially, so fans are looking forward to learning their marriage story in the future and seeing Noah as a good husband.

The lovers have a son together, Harold; he was born in March 2019. The celebrity has no Instagram and Twitter accounts.

Both critics and ordinary movie lovers welcomed Little Women enthusiastically. Gerwig not only won public recognition but also many prizes, including the Critics’ Choice Movie Awards.