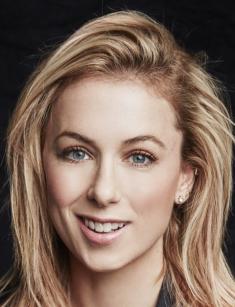 Iliza Vie Shlesinger is an American comedian who gained recognition after winning the So You Think You're Funny competition. Currently, she works with Netflix that releases her show episodes, and goes on various comedy tours.

Iliza Shlesinger was born in New York in 1983. As a child, she lived in Texas, where she studied at the private Greenhill School and was a part of the school’s improvisation group. After finishing school, Shlesinger entered the University of Kansas and started performing as a member of the improvisational comedy team, ComedySportz Dallas. Then, she moved to Boston and studied at Emerson College, where she also participated in the comedy group called Jimmy's Traveling All Stars. Iliza graduated from the college and majored in film.

After her graduation, Iliza went to Los Angeles with the desire to start a career as a comedian. She turned out to be one of the most famous members of the Whiteboy Comedy group there, and that led her to performances at the comedy club, The Improv, in Hollywood.

In 2007, Shlesinger became a winner of the So You Think You're Funny contest at the Myspace platform. She appeared on various TV programs, including Comedy Central Presents, John Oliver's New York Stand Up Show, Comics Unleashed, and History of a Joke. In 2008, Iliza turned out to be the first female and youngest winner of the competitive show, Last Comic Standing. She also took part in The Last Comic Standing Tour.

In 2007–2012, Shlesinger was a host The Weakly News on TheStream.tv, and in 2011–2013, she hosted Excused. In 2013, she starred in the movie Paradise, together with Julianne Hough and Russell Brand. In summer 2014, Iliza created her own podcast Truth and Iliza, where she invites different celebrities and friends as guests. Besides that podcast, the comedian also appears on others; for instance, in December 2019, she was at The Joe Rogan Experience.

In 2016, Iliza created and starred in the series Forever 31 that was released by the ABC. Next year, her own nigh show Truth & Iliza started airing on the channel Freeform. In November 2017, Shlesinger published her book titled Girl Logic: The Genius and the Absurdity that can be bought on the Amazon. Also that year, in December, a man sued Iliza for not letting him to one of her “girls-only” shows.

For 2019, Shlesinger has a net worth of approximately $2 million. She is a rather famous personality now and has a lot of business to do, so Iliza hired a personal assistant, and that is Emily Higgins.

Shlesinger has four stand-up specials for Netflix. Her first one, War Paint, was recorded in December 2012 at The Lakewood Theater in Texas, and then it had its premiere in September next year. In January 2015, Netflix released Iliza’s second comedy album titled Freezing Hot. Following the stand-up special, Confirmed Kills premiered on Netflix in September 2016. The fourth album Elder Millennial, which was recorded on the USS Hornet Sea, was released in July 2018. The recent special titled Unveiled premiered in November that year. That episode became the last one where Iliza’s beloved dog Blanche appeared: a few weeks after record of the Unveiled, Blanche died. After its death, Shlesinger created an Instagram page in her honor, where she does charity for animals now.

In 2019, Netflix ordered a sketch show from Shlesinger, and Laura Murphy will direct it.

On May 12, 2018, Shlesinger married Noah Galuten. Their wedding took place at the South Park City Center in L. A., and they had a traditional Jewish ceremony. Iliza’s husband works as a writer and chef in his own restaurant.