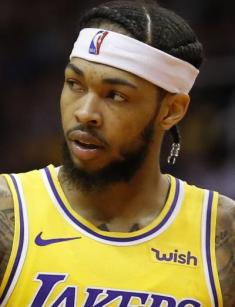 Brandon Ingram is a basketball player from the USA; he is currently a member of the New Orleans Pelicans. He is also famous for his performance in the Los Angeles Lakers.

The would-be sportsman was born in North Carolina on September 2, 1997. There were three kids in the family: Brandon has a half-brother, Donovan, and a half-sister, Brittany, from the parents’ previous relationships.

The brother often played basketball with Brandon; sports helped the boy survive in a deprived area. He went to Kinston High School and joined its basketball team, helping it reach state tournaments four times in a row.

Young Brandon successfully combined his studies at Duke University and basketball; he scored 15 points in his debuting match. Overall, his Duke college stats were good: he could boast 17.3 average points. Such impressive results allowed the athlete to finish his college career early and switch to the professional level in 2016.

In summer 2016, the Los Angeles Lakers selected the 18-year-old player. He had the first chance to show his abilities in October of the same year against the Houston Rockets, earning nine points. From that time, his defensive rating was improving from game to game, and nothing could possibly stop Ingram. The rookie received several prestigious prizes.

Two following seasons with the team were also good. The small forward took part in the Rising Stars Challenge during NBA All-Star Weekend. He had an injury in March 2018 and also missed several games suspended.

In 2019, Ingram signed a contract with New Orleans Pelicans. He continued to break his own records; for instance, the match against the Brooklyn Nets brought 40 points, which did not help, however, gain the victory.

In 2016, the sportsman was one of the U.S. select team members who prepared the national team for the upcoming Olympic Games in Rio de Janeiro.

The young man’s personal life has been complicated. He used to date his school friend Tiffany, but the couple broke up in May 2016. Journalists spotted the athlete hanging out with the supermodel Bella Hadid at the end of 2017.

Today, the media mention Amber Washington as the athlete’s girlfriend. He is probably having an affair with the stripper Raelynn Inez; she is not allowed to share their pictures on Instagram, but rumors have it she has broken the rule several times, and followers recognized Ingram’s tattoos.

January 2020 was lucky for Brandon: he celebrated his career-high 49 points after the game with the Utah Jazz. The score was 138-132. Some experts compare Ingram to Ben Simmons and claim the former’s career stats have been more remarkable.

Brandon Ingram’s net worth is $5 million in 2020. He might become a free agent, but no details have been given so far.