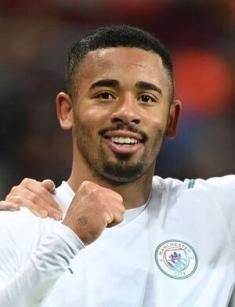 Gabriel Jesus is a professional football player from Brazil who plays as a forward. He represents his national team and plays for Arsenal in the Premier League. He used to play as a forward for Manchester City, before signing a long-term contract with his current club.

Gabriel Jesus is known as a versatile and aggressive forward, who can perform roles ranging from attacking midfielder to center forward. He is often praised by sports commentators. Football legend Ronaldo has called Jesus a rising star of Brazilian football.

Gabriel Jesus hails from the rough neighborhood of Jardim Peri in São Paulo. His birth date is April 3, 1997. Growing up in the favelas, he spent most of his time playing street football. He was raised by his mother, Vera Lucia, who approved of Gabriel's interest in football since it kept him from getting in trouble with the police.

At the age of 13, Gabriel Jesus was scouted by a representative of a small, old-fashioned football club called Anhanguera, which means "old devil" in the Tupi language. He scored his first goals playing in the youth league and went on to sign his first contract with Palmeiras FC.

Jesus had stayed with Palmeiras for almost five years, finally making his transfer to the English Premier League by joining Manchester City FC.

In 2015, Jesus played for the Brazil Sub-20 team, helping his national team advance to the finals where they lost to Serbia 2–1. Jesus made the headlines by scoring the first goal of the tournament.

2016 was the first major highlight of his career. The Brazilian team took first place in the Rio Olympic Games with Jesus scoring 3 goals during the tournament. He was praised by his team's captain, Neymar, for making helpful assists.

Jesus has appeared in 159 games for Manchester City, scoring 58 goals. He wore a t-shirt with the number 33 on it.

He made his debut for Arsenal FC on 5 August 2022, playing against Crystal Palace FC. Reportedly, his yearly salary is £9 million a year.

Gabriel Jesus is in a relationship with Instagram influencer Raiane Lima who has thousands of followers. The couple welcomed a baby daughter, Helena, in 2022.