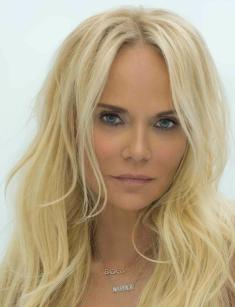 She is a well-known and widely recognized performer. The audience knows her as a talented singer as well as an actress.

The actress has not pure fate. Kristin was adopted when she was only five days old. Her parents are chemical engineers. As an adult Kristin met her birth mother. Her mom asked whether she could forgive her. Kristin said that she had nothing to forgive, as her birth mom gave her a great life, and Kristin had the right parents.

From an early age, she gets used to being in the limelight. In childhood, the actress sang gospel music. She performed at the local churches. Kristin has got bright talent, that’s why she studied opera and was seriously thinking about the career of an opera singer. Besides, she participated in the beauty contest and won the title “Miss OCU.”

In 1990 she received a bachelor’s degree in musical theatre, and two years later, she gained a master’s degree in opera performance. In her college period, Kristin performed in the local theatre. After getting the master’s degree, she took part in the regional singing competitions and was named one of the most promising young artists. She was offered a full scholarship of the Academy of Vocal Arts.

However, one accident changed her mind. She moved to New York to help her friend move. Being temporarily in New York, Kristin decided to go on the auditions which were held in the local theatre in New Jersey. She successfully passed the tests and took part in the musical. That was her turning point. Kristin decided to stay in New York and to begin her professional career. And that was the right decision.

The actress’s bright talent and multitalented nature allowed her to unleash the potential in music, theatre, and movies. Kristin’s ability was highly appreciated. She has got a huge fanbase and numerous critical positive reviews. The artist received the number of accolades, especially for her work on theatrical musicals.

Her debut appearance on theatre happened in 1993. That year she played Arabella Rittenhouse in the musical “Animal Crackers.” Besides, she appeared on several musical performances, “Babes in Arms” among them. Appearing in “Scapin,” the actress gained the first positive critical review, she was called “ingenue and delightful.”

1997 was a particular year for the singer – she got her first role on Broadway. She made her debut appearance in the part of Precious McGuire, working on the musical “Steel Pier.” Her performance in the “Strike Up the Band” was also critically appreciated.

In 1999 she appeared in the musical “You’re Good Man, Charlie Brown” and took two prestigious awards.

At the beginning of the 2000s, Kristin decided to focus on her musical career. In 2001 she released her first album and made concerts with it. But in 2003, she returned on the stage to perform in “Wicked.” She became famous for singing “The Girl in 14G” and “Taylor the Latte Boy.”

Until 2015 she had successfully appeared on stage and became one of the most respected performers of Broadway. She established herself as a theatre star and vocal powerhouse.

Kristin also had seen colossal success across television. Besides her musical career, she appeared on numerous TV shows. Her debut on screen was in 1999 when Kristin appeared on TV series “Paramour.” The public loved Kristin’s characters in “The West Wing” and “Pushing Daisies.” Besides, she made bright guest appearances in “Glee” and “Sesame Street.”

The actress also played supporting roles in movies, “The Pink Panther” among them. She also voiced characters in “My Little Pony” and “The Peanuts Movie.”

She released seven albums. The latest was published in 2019. The singer named the album “For the Girls” and devoted it to women who inspired her to become a singer.

There is much information about the performer on the Internet. Interestingly that the singer stated that she didn’t like her speaking voice, she said, “I feel like I sound like a bug too. I feel like a combination of Betty Boop, Marilyn Monroe, and a five-year-old.” In 2019 she went on the gay cruise and called this experience her version of heaven. “Love Cruise” because everybody is just there to have fun.”

In 2009 the artist released her autobiography, where she talked about her adoption, personal life, and work on stage.

The singer often talks about the significance of faith in her life. She was raised as a practicing Cristian. In 2005 she released an album that consisted of gospel music and contemporary Christian music. But her values sometimes ran afoul of some conservative Christians. Thus she supports gay rights.

For her life, the singer was involved in the love whirlwind with famous personalities, among them Seth Green, Marc Kudisch, and Aaron Sorkin.

The singer suffers an inner-ear disorder, which can bring vertigo, nausea, and headaches.

The actress had never been married, even though she was engaged three times in her life. In the candid interview, the singer named herself a runaway bride. “I still believe in marriage, but really and truly, I want to find the right person. I look up to women who are strong and really good at what they do. [In dating], there’s a sacrifice it takes when you’re a successful working woman, so as women are getting stronger, it’s happening later in life.”

Besides, she hasn’t got any kids. The performer confessed that she didn’t feel the need to have children. However, if she decided to have a kid, she would adopt a child. Now she is dating. Her boyfriend is a skilled musician Josh Bryant.

For her thirty years of work in show business, Kristin accumulated dozens of awards and accolades, among them Tony Awards (1997) and Primetime Emmy Awards (2008).