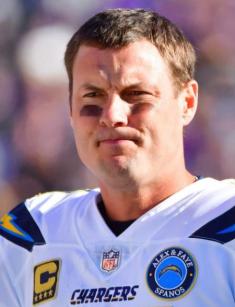 Philip Rivers is an American quarterback and a member of the Los Angeles Chargers. The sportsman is known for his achievements, including eight Pro Bowl picks, as well as many records and awards.

The would-be football star was born in winter 1981 in Alabama. There were three children in the family: Philip, his brother Stephen, and sister Anna. The boy grew up in a sports atmosphere: his father worked as a high-school head coach.

The family moved from Decatur to Athens, where Rivers went to high school. He showed his good football abilities soon; by graduation, the young man had several offers and selected North Carolina State for further education.

The promising athlete joined the college team in 2000. He started bringing victories early and had 25 touchdowns in his first year; experts awarded him eight Rookie of the Week titles.

The next seasons were no less advantageous; consecutive triumphs were record-breaking. Rivers’s college stats improved up to 34 touchdowns in twelve matches, which made him the most efficient QB in ACC.

Although Philip’s advances were notable, professional teams did not rush to select him because of his unusual throwing fashion and low arm strength. Eventually, the sportsman was picked by the San Diego Chargers (the Los Angeles Chargers later) after Eli Manning announced he was unwilling to collaborate with them.

Because Rivers was late to join the training camp, Drew Brees became the starting member. In fact, he was not the second or third QB option and had few opportunities to play in his rookie year. Things changed in 2005; despite shoulder trauma, the athlete was allowed to appear in the field more frequently.

Since 2006, the athlete has become a permanent player in NFL games. Whether the Chargers faced victories or losses, Rivers was good; he had 331 passing yards in the failure match against the Miami Dolphins. Prestigious prizes followed one another.

2018 and 2019 have been his best seasons. In November 2018, the quarterback broke the all-time record for consecutive completions with 25, as the Chargers reported on Twitter.

Philip is a perfect example of a loving and loyal husband. He married his college girlfriend, Tiffany, in 2001; the spouses live in full harmony today. They have nine children: the eldest daughter, Halle, was born in 2002.

In 2013, the athlete’s son Gunner was diagnosed with type one diabetes. The disease made Tiffany a social activist: the woman is working to raise awareness about it.

In March 2019, the parents welcomed a new baby, Anna. The quarterback attended a press conference with the girl in November 2019, and many journalists’ reaction was emotional.

At the beginning of 2020, fans learned the news that Rivers and his family left their San Diego house for Florida. He is either going to retire soon or sign a new contract.