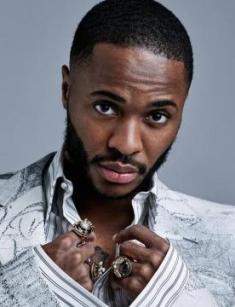 Raheem Sterling shows the beautiful and spectacular game on the football field. The list of English footballer with Jamaican origin has a lot of bright achievements. His playing position is Winger / Attacking midfielder. The sportsman is5 ft 7 in (170 cm) tall and weighs 152 lbs (69 kg). Being a Muslim, the player stands against racism.

The footballer was born on December 8, 1994, on the outskirts of Jamaican Kingston. The boy's childhood took place in dangerous conditions. The house where the family lived, was located near the drug den. The boy's father was murdered when Raheem was only two years old. The boy's good fortune was to move to London, where his mother was invited to work. The woman, without hesitation, left Jamaica and moved to the UK with four children.

The London area where Raheem's youth took place was not very different from Jamaican. The future footballer grew up a troubled child and got into correctional school. The teenager didn't like the school classes, but Sterling got acquainted with football right there. The games were arranged by representatives of the weekend school, who allowed the boy to train with them.

Gaining a little experience in the game, the boy managed to enter Queens Park Rangers, a London-based professional football club. Regular training and a desire to become a famous sportsman led the teenager to the fact that at the age of 14, Raheem played for the team U-18 and scored a goal in this match. At the age of 15, Raheem had already made his debut in the Premier Academy League, thus becoming the youngest player in its history.

Sterling's career in Queens Park Rangers developed successfully for the sportsman, Raheem was also invited to play in the youth team of England. Bright, dynamic game of the young player on the field drew the attention of famous English football clubs, among which were Liverpool, Arsenal, and others.

In 2012, a momentous event took place in the biography of the footballer. He started working with Liverpool. The midfielder's game impressed both football critics and spectators. Already in October, in a match against Reading, Sterling scored the first goal, as a result of which Liverpool won the meeting. In December 2012, the club signed a new contract with the player.

In 2013-2014, Raheem continued to confidently score goals, which provided the club with new victories. By that time, the midfielder had managed to sharpen his technique and showed the art of tactical play. In 2015, the player moved to Manchester City. The club signed a five-year contract with Sterling, with Liverpool receiving £49 million for the player.

In parallel with his playing career in clubs, Raheem participated in matches of the English national team. The midfielder made his debut in the national team when he was 17 years old. Then Sterling in the team played in a friendly match against Sweden. And the meeting with the Czech team allowed the midfielder to demonstrate a skillful technique. The player could make a hat-trick into the opponents' gates.

Experts note that the midfielder has a unique way of playing. Even if we remove the players' numbers from the shirts, Raheem will be immediately recognized. It is easy to identify the young man by the high speed, and that is even though the ball is always at Sterling's feet. The sportsman demonstrates excellent dribbling, can play on several positions, and never ceases to amaze the professional and memorable game.

The rapid development of the young player's career attracted attention not only of fans but also of girls. Being young, the midfielder had an affair with Shana Ann Rose. Soon, the 17-year-old sportsman became a father. The daughter was named Melody Rose, and the happy father got a tattoo on his shoulder with the girl's name on it. The couple's relationship did not last long.

The player had a serious relationship with Paige Milian. The couple got married, his wife gave the footballer an heir, a son named Thiago. However, Raheem's windy character led to the breakup of the couple. The press repeatedly posted photos with new passions of the player.

After the breakup with Paige, the man's personal life changed, and he decided to return to his wife. She forgave her husband, as evidenced by the photo of the couple on the player's page on Instagram.

In 2019, the midfielder continues to play for Manchester City. On Instagram, the player posts spectacular photos from the matches.