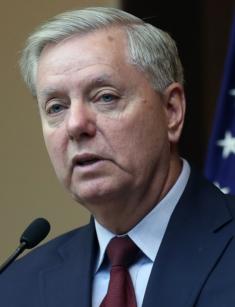 Lindsey Olin Graham is an American Republican politician who has been a U. S. Senator from South Carolina since 2003 and the Chair of the Senate Committee on the Judiciary since 2019.

Lindsey Graham was born in South Carolina in 1955 to Millie and Florence James Graham. Lindsey studied at the D. W. Daniel High School, and after graduation, he turned out to be the first member of his family who went to college. He also joined training programs, the Reserve Officers' Training Corps.

In 1982, Lindsey became an officer in the Judge Advocate General's Corps in the U.S. Air Force. He started serving as an Air Force defense attorney, and in 1984–1988, he worked as an Air Force's chief prosecutor in Europe after he was transferred to Germany. After that, Graham went back to South Carolina and started his private practice as a lawyer.

In 1989, he entered the South Carolina Air National Guard, and in 1995, Lindsey joined the U.S. Air Force Reserve. During the Gulf War in 1990–1991, he served as a judge advocate at the McEntire JNGB.

In 1998, Graham received the promotion to lieutenant colonel, and in 2004, he was promoted to colonel in the U.S. Air Force Reserve. The official ceremony was held at the White House. In 2015, Lindsey retired from the Air Force after more than 33 years of service, because he reached the retirement age for his rank – 60 years old.

US House of Representatives

In 1994, the Democratic U.S. Congressman Butler Derrick, who represented South Carolina, announced about his intention to retire. With the support of Strom Thurmond, the Republican U.S. Senator, Graham won the Republican primary election and defeated Bob Cantrell and Ed Allgood. Then, he defeated James Bryan Jr. by getting 60% of votes. Lindsey turned out to be the first Republican who represented his district since 1877, and it became a part of the Republican Revolution that year.

In 1996, Graham defeated Debbie Dorn, Butler Derrick’s niece. That year, Lindsey voted for the Defense of Marriage Act. Two years later, he was re-elected again, and in 2000, he defeated Democrat George Brightharp.

In 2002, U.S. Senator Strom Thurmond retired, and Graham ran for that position. He won the Republican primary with any opposition, and then he defeated Democrat Alex Sanders. That way, Lindsey turned out to be the first new U.S. Senator from South Carolina since 1965. In 2008, while running for a second term, Graham defeated Buddy Witherspoon and then Bob Conley, a Democratic engineer.

In 2014, Lindsey ran for the re-election, and he was thought to be the most vulnerable candidate because of his low ratings and compromise with Democrats, which considered a lousy reputation for a Republican. However, Graham found a way to win. He became friends with his potential opponents and helped them with fundraising. There was a new concept called “Graham machine," the operation that led to building six new regional offices across the state and a huge amount of support from paid staffers and also volunteers. Eventually, Graham defeated Senator Lee Bright in the Republican primary and also Brad Hutto, Victor Kocher, and Thomas Ravenel in the general election.

For 2019, Graham has a net worth of approximately $5 million.

Lots of politicians are controversial personas, and Graham is not an exception. For instance, in one episode of Fox and Friends, he made a joke about his terrible feelings he would have if a DNA test had shown that he had Iranian origin. The host of the show, Brian Kilmeade, tried to soften the situation. However, the president of NIAC Jamal Abdi found that Graham’s comment as “disgusting." That led to lots of reactions from respected Iranian-Americans, including a journalist Christiane Amanpour and the chairman of Twitter Omid Kordestani.

Graham also has an interesting relationship with Donald Trump. In 2015, while being still a Republican presidential candidate, Lindsey called Trump a “jackass” in response to Trump’s statement that Lindsey’s friend, Senator John McCain, was "not a war hero." Next year, the conflict was still there, and during the presidential election, Graham voted for Evan McMullin, showing his disrespect for Trump. However, these two had a meeting in March 2017, and the breaking news was about how it went so well that they started playing golf together. Lindsey announced that he would support Trump in the re-election in 2020. That "friendship" is not endorsed by other Graham's colleagues, including Joe Biden. However, Graham does not believe in every Trump's decision; in October that year, he criticized the president's plans to withdraw U.S. troops from northern Syria.

Among recent news, in September 2019, Graham was under pressure because he posed for a photograph with Geert Wilders, a Dutch politician who is known for his hatred about immigrants and Islam.

Graham has never had children or wife yet. However, he already has a parental background. When his sister Darline was left without parents at the age of 13, Lindsey helped to raise her. After the announcement of his candidacy for the presidential race in 2016, Darline said in one interview that she wanted to show a human's part of her brother, so she shared that Lindsey was a great mixture of a brother, a mother, and a father in her childhood.

Currently, Graham lives in Seneca, South Carolina, and he is a Southern Baptist.

During his military service, Graham received a Bronze Star medal for commendable service as a legal adviser to the Air Force in Iraq and Afghanistan in 2009–2014. The amount of politician's awards is uncountable, but it includes the President’s Leadership Award, True Blue Award, and Sonny’ Montgomery Eagle Award.