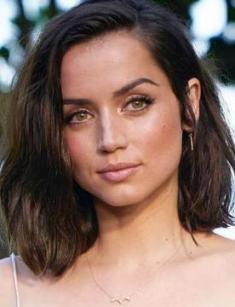 Ana de Armas is a Cuban-Spanish actress, the star of American cinema. She began her film career in Spain, but the talent of the attractive woman was noticed by Hollywood directors. Nowadays, Ana is confidently moving towards her goal, living by her father's motto:

Ana was born on April 30, 1988, in Cuba, in the town of Santa Cruz del Norte. From childhood, the girl dreamed of a stage and danced excellently. When Ana was a teenager, her family moved to the USA. She graduated from high school in Dallas, and then returned to her native Cuba. There she entered the National Theater School of Cuba to study acting.

Ana de Armas began an acting career early. At the age of 16, the girl made her debut in the movie Una rosa de Francia, in which she worked on the set with Spanish actor Álex González. Although Ana made a brief appearance on the screen, playing only a bit part, she started her way to the movie stardom. The girl could improve her acting skills in the next movies Madrigal and El edén perdido.

Ana de Armas went to Madrid after a successful career start. The artist did not come to the castings of various projects empty-handed because Ana’s credentials included several roles. The young actress, who had an angelic appearance and knew the peculiarities of the film industry, easily got the role of Carolina Leal in the melodrama El Internado. Ana starred in six of seven seasons of the TV series.

Thousands of Spanish television viewers watched El Internado, and her heroine, Carolina, became one of their favorite characters. Ana's heroine dies at the end of the 6th season, so she did not participate in the final season. The directors were forced to do it since she went to travel around the USA to relax and improve English.

However, not the TV series, but the full-length movie Mentiras y Gordas made the Cuban actress a celebrity. This film was the highest-grossing project in Spain in 2010. No less successful project was the next melodrama series entitled Hispania, la leyenda. It is noteworthy that the heroine of Ana dies in the arms of her lover, as well as in the previous project.

In the summer of 2010, de Armas received an invitation to work in a series again. This time, she appeared in the TV series Hispania, la leyenda. The actress played one of the title roles in the film, portraying slave Nerea. The project was a huge success. During the seasons, Hispania, la leyenda had high ratings on Antena 3. Ana de Armas played Nerea for two seasons but did not appear in the final one. The actress left the project to pursue a career in Hollywood.

In 2011, the actress's filmography included the role in the thriller El callejón, which was created by Spanish and Cuban filmmakers. In the story, de Armas’s heroine had to fight the serial killer, who got the girl in a semi-basement of the laundry room.

Her first American film is the Hollywood project Knock Knock. It is Eli Roth’s thriller, in which de Armas received a starring role along with Keanu Reeves. The movie was released in early 2015. The same year, the fantasy detective Exposed was released, in which the movie duo of Ana de Armas and Keanu Reeves appeared again.

In 2015, Ana signed a contract with a Spanish production studio again to participate in Antonio Trashorras’s horror movie Anabel. In the story, a mysterious elderly gentleman begins to share an apartment with two students, whose friend has disappeared.

In 2016, GQ included de Armas in the list of the Most Beautiful Women in the World, alongside such recognized stars of show business as Kim Kardashian, Selena Gomez, Priyanka Chopra, and Alessandra Ambrosio. Ana was also named in Cosmopolitan Magazine’s “Most Attractive People” list. She weighs around 121.25 lbs. (55 kg) with a height of 5.51 ft. (168 cm).

The same year, the woman joined the main cast of the war comedy War Dogs about two childhood friends who started an arms trade business and signed a contract with the Pentagon. Ana played the role of Iz and worked with the main actors John Hill and Miles Teller.

A significant work for de Armas is the 2016 movie Hands of Stone. On the set, the actress met Robert De Niro. According to Ana, the experience which she gained working with the legendary actor has become invaluable.

On June 15, 2017, the action movie Overdrive premiered, which told about two scammers who earned a living stealing expensive cars. Scott Eastwood, Gaia Weiss, and Clemens Schick played the title characters in the Franco-American project. Ana got the role of Stephanie, a friend of a young man. The movie turned out to be commercially successful because the creators of the action movie earned $1 million only in Russia for three months.

Later, she appeared in the popular science movie Blade Runner 2049, the sequel to the 1982 film of the same name. They kept shooting a secret because in the project, starring Ryan Gosling and Harrison Ford, none of the actors knew the whole script. The Cuban actress managed to join the main cast and play the role of Joi, the beloved woman of the protagonist.

It was a great success for the actress to star in such a Hollywood project, although the movie could barely earn back its production budget. Ana was impressed by the close communication with her partner Gosling.

According to the Cuban actress, she has not met people that have been more modest than Ryan. It was also amusing to see the relations between the two Hollywood stars because Ford and Gosling periodically debated over the best trailer on the set and even figured out who would be the first to go on the red carpet, presenting movies.

After filming the sequel, Ana decided to move to Los Angeles. Previously, de Armas doubted that she would stay in Hollywood for a long time, but then she began to receive exciting offers to play in significant projects. The actress is pleased that all her heroines are bright and emotional women who can stand up for themselves. She would not like to play reserved characters who always doubt.

Ana de Armas dated her colleague on the set, Marc Clotet. The artists married in 2011. The newlyweds celebrated a wedding on the island of Costa Brava. Soon, tabloids began to cover the personal life of de Armas. Contrary to the expectations of fans, the news did not tell about the appearance of children in the young family, but the possible breakup of Ana and her husband.

In 2013, Marc, who arrived at the Goya Awards ceremony in Madrid, had to admit under the pressure of journalists that their marriage had ended. When the divorce was finalized, Ana was not single for long. Her new boyfriend was the son of the famous Spanish writer Manuel Rivas, actor Martiño Rivas, whom de Armas met on the set of El Internado, even before her wedding with Clotet.

The celebrity has a page on Instagram, where she posts personal photos, avoiding sharing pictures of her boyfriend.

She spends free time in her native Havana, surrounded by her family. The Cuban actress does not mind seeing new countries. Thailand has become her favorite vacation place to travel with friends. The pics of the actress in a bikini sometimes appear on her page.

The actress adds new projects to her filmography. In 2018, she played the leading role in the English project The Informer, and a year later appeared in the musical film Yesterday of the English director, Danny Boyle.

The actress’s career has recently reached a new stage because Ana de Armas has been cast in the leading role for the biographical drama entitle Blonde.

The Hollywood project will be devoted to unknown facts about the life of movie star Marilyn Monroe. Brad Pitt will be the producer of the movie. Ana’s fans agree that the actress could sign a lucrative contract thanks to her figure, appearance, and acting talent. Filming began in the summer of 2019.

In 2019, fans of the actress were also pleased with the release of the crime thriller Knives Out, in which Ana starred with Chris Evans. Moreover, the action movie Wasp Network is planned to be released in 2020, which will also feature de Armas.

Ana de Armas has a net worth of $4 million.