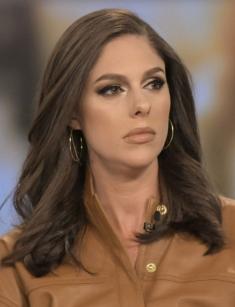 She is a journalist and TV host who received a bachelor's degree in political science and communications. Since that time, the journalist worked on several channels.

Abigail was born into a big family. Two of her siblings were adopted. Since childhood, Abby displayed an interest in performances. Her mother is an activist; her father is a politician and businessman. They supported Abby's passion and allowed her to try her hands in local projects. The other girl's passion was tennis.

Though the reporter was born in Philadelphia, she grew up in Utah. As a child, her family traveled a lot and lived in Asia. In 2008 she received a bachelor's degree in political science and communications.

Since 16, she worked behind-the-scenes positions on ABS's morning show. As a teenager, she hated that job and was going to abandon journalistic forever. However, Abby continued to study that field at the University. During her college years, Abby interned for the famous American TV journalist. That experience inspired her to become a TV journalist.

After graduation, she worked as a TV host as well as a producer. In 2012 Abby took part in her father's presidential campaign, where she worked as a media advisor. She and her sisters posted goofy parody videos in social networks and attracted widespread attention. In 2013 she appeared on the TV program “Real Time with Bill Maher”.

That time she also began working as a political commentator.

Thanks to her quality and extensive expertise, Abigail established herself as an up and coming media personality. Moreover, the journalist repeatedly denied any speculations of her father's bonds.

In 2013 she took the position of a second replacement host on MSNBC's show. In 2015 the TV program was closed, and Abby left her job. That year she began working as a reporter at an ABC talk show. She left the show in 2020 to join her dad’s presidential campaign.

In 2010 the reporter married her long-term college boyfriend. Her husband is an investment analyst. She became a mother, giving breath to her first daughter in 2017. In she was pregnant with the twins. She welcomed a daughter and a son that year.

The reporter was raised in the traditions of the Mormon church; however, as an adult, she decided to leave it due to her beliefs. The TV host supports same-sex marriages and actively defends women's rights. These beliefs are not sympathetic to the Mormon Church. She suffers from aerophobia.

Many people questioned is Abby a Republican or Democrat? The reporter expressed her thoughts in the interview. She proffered to stay out from labels and tried to be in both camps. She said, “I don’t like to define myself as necessarily conservative. What is it to be a conservative? What is it to be a Republican, even? … I’m probably more fiscally a Republican. But socially, I’m just accepting of everything. I want everyone to be happy; I want everyone to live a life that they’re proud of. So, I’m not going to sit there and judge them and speak for them. That’s just who I am.”

Abby’s sister Elizabeth is a self-proclaimed comedian and trouble-maker. She married in 2014.

The reporter is from a wealthy family, moreover, she has made a career in TV journalistic. Her prolific career allowed her not to think about money. The reporter’s net worth is estimated at $20 million.