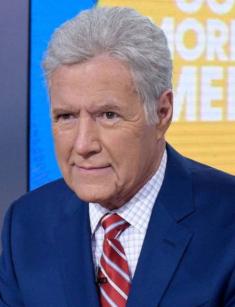 George Alexander Trebek is an American television host and actor but the native of Canada. He gained wide recognition for hosting the show Jeopardy!. Trebek still works on it, and he has a contract signed until 2022.

Alexander Trebek was born in Canada in 1940 to George Edward Trebek, an emigrate from Ukraine, and Lucille Lagacé. Alexander grew up in a French-English household, so he has known both languages since childhood. At the age of 13, Trebek got his first job as a bellboy at the hotel where also worked his father.

Speaking about his education, Alexander studied at the Sudbury High School, and in 1961, he graduated from the University of Ottawa with a philosophy degree. The year of his graduation, Trebek started working for the CBC, and that is how his news career began.

Trebek made his debut as a host on the music television series Music Hop in 1963. In 1966, he was a host for the school quiz program Reach for the Top and three years later – for the Strategy. In 1973, Alexander moved from Canada to the United States. That year, he started working for NBC on the game show The Wizard of Odds, and in 1974, Trebek hosted another show High Rollers, which had two incarnations on NBC in 1974–1976 and 1978–1980. In 1977, he started hosting The $128,000 Question that was recorded in Toronto. That is how Alexander turned out to be the host of the shows both in the U. S. and Canada. Another man, Jim Perry, hosted Definition and Headline Hunters in Canada and Card Sharks in the U. S.

Alex appeared not only as a host but also as a guest on several TV shows, and so did many other hosts. In 1980, he took part in the competition in charity on the Card Sharks, and he won defeating Bill Cullen in the final show. Trebek also made an appearance on the game shows like The Magnificent Marble Machine (1975), To Say the Least (1978), and Celebrity Bowling (1976).

In 1980, High Rollers was canceled, and Alexander started working on the Battlestars. Then, he was occupied in shooting pilots for Merv Griffin for the revival of the game show Jeopardy! Eventually, Trebek got the position of its host, and since 1984, he has been hosting this show. In 1987, Alex started working as a host for the Classic Concentration. In 1991, Trebek turned out to be the first person who hosted three American game programs simultaneously.

In 1996, Alexander appeared in the episode of the third season of the series The X-Files as one of the two Men in Black together with Jesse Ventura. Next year, on April Fools' Day, Trebek and the host of Wheel of Fortune, Pat Sajak, changed their places. So that day, Sajak was on the Jeopardy! and Alexander co-hosted Wheel of Fortune with Sajak's wife, Lesly.

In 2008 and 2011, Trebek appeared on Jimmy Kimmel Live! show and discussed his durable career on the Jeopardy!. He also starred in some sitcoms, including How I Met Your Mother in 2010 and Hot in Cleveland in 2014.

For 2019, Alexander has a net worth of approximately $50 million. He has made his reputation and money thanks to work on television, especially the show Jeopardy!. For this show, Trebek receives an annual salary of $10 million. We offer you to watch the videos with the best moments of Alex on Jeopardy!.

In 1974, Trebek married Elaine Callei, who was a businesswoman. They divorced in 1981 with no children. In 1990, Alex married Jean Currivan, who worked in a real estate sphere. Now, he and his wife have two kids: a son Matthew and a daughter Emily.

Since the 2010s, Alex has started having some health issues. In July 2011, a burglar broke into Trebek’s hotel room in San Francisco, the host chased him, and eventually injured his Achilles tendon. Later that year, in December, he had a minor heart attack but returned to work in January as it was scheduled. In June 2012, Alexander had a mild heart attack but again rather soon returned to work – in July.

In October 2017, Trebek fell and then faced its aftermath in December when he was taken to the medical center. It turned out that Alex had a subdural hematoma, so he needed to have surgery to extract a bunch of blood from his brain. In January 2018, he already was at work. In October 2018, Trebek signed a new contract to continue his work as a host through the 2022 year.

On March 6, 2019, Alex announced that he had the diagnose of stage IV pancreatic cancer. The news was shocking, and no one, including the host himself, did not expect that. There is information that one of the main risk factors could be diabetes. Alex claimed that he would fight cancer, and he would continue hosting the Jeopardy! anyway. In May, Trebek stated that he was responding very well to his treatment and thanked all fans for their support and prayers. His main plans include more courses of chemotherapy to push cancer into full remission. Speaking about his current health condition, Alex remains positive, and he hopes to beat cancer. However, in a few interviews, he said that he was not afraid to die and that he had lived a happy and full life.

Alexander hosts The Great Canadian Geography Challenge every year, and until 2013, he hosted the National Geographic Bee contest. He has also traveled a lot with the organization World Vision Canada to various developing countries. In 1998, Trebek made a donation of 74 acres (30 hectares) of land in the Hollywood Hills to the Santa Monica Mountains Conservancy which aim is to save the earth as an open space for wildlife. In 2016, the University of Ottawa received $5 million from Alex to fund Alex Trebek Forum for Dialogue for the development of students' academic life.