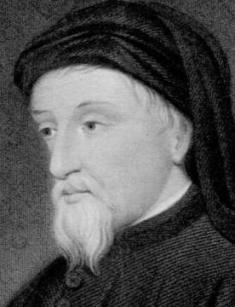 Contemporaries called Geoffrey Chaucer the “father of the English literature”, and successors treat his heritage as the greatest legacy of the Middle Ages. Many quotes from his books remain popular today. Chaucer was among the pioneers who popularized the English language in literature, while Latin and French were dominating in the country.

Geoffrey Chaucer was born in approximately 1343 in the capital of Great Britain. His father was a wine seller and provided the royal court with alcohol. Thanks to his parent’s connections, 17-year-old Geoffrey became a page for Countess Elizabeth, the wife of Duke Lionel.

In 1359, he joined the English army, participated in a military expedition to France, and got caught. The king bought him out, though, to make the young man his personal valet and armor-bearer. At the same time, artistic Geoffrey composed poems to some woman, whose feelings to him were not mutual.

As the war finished, Chaucer entered the London law school and received literary training there; he studied not only classic works but also patristic, middle-age Latin, and modern French texts. The knowledge proved to be useful later when Chaucer translated The Romaunt of the Rose and created small poems.

The “youth” period in Chaucer’s oeuvre lasted from 1369 to 1379; it can also be called French due to the great influence of the courtly literature. The poet translated Le Roman de la Rose, one of the most famous books published in the Middle Ages.

The 1369 poem The Book of the Duchess was devoted to the death of Blaunche, the first wife of the Lancaster dynasty founder John of Gaunt. The young man showed his non-ordinary abilities to create memorable descriptions.

In 1367, Geoffrey was appointed the royal valet. The first journey in Italy occurred in 1372; the poet held negotiations with the leader of Genoa. Five years later, Chaucer went to the same place and stayed there for six months, learning the Italian language and watching the early Renaissance period with its city culture development.

Italian poets had a great impact on Geoffrey’s perception; he borrowed many forms from local artists, such as Petrarca, Dante, and Boccaccio: long passages of declamation, poetic turns, and even storylines. The man also met poets who wrote in Latin.

Thanks to the profound in-field studies, the artist learned how to sound graceful and complete; English writers were not familiar with that. Chaucer also came back to London from time to time and performed his administrative duties.

In 1374-1386, Geoffrey worked as a customs officer and inspector; his life was relatively peaceful. The man worked diligently and simultaneously devoted pretty much time on poetry.

1380-1386 became the Italian period in Geoffrey’s life; this is when he created and published The Canterbury Tales, the poems The Parlement of Foules, Troilus and Criseyde, The House of Fame, and The Legend of Good Women. The forerunner of the Renaissance continued to gather inspiration from his foreign colleagues, but there was pretty much personal in his texts.

Thus, Chaucer became an independent author. His unique style manifested itself in natural dialogs and picturesque narration. Besides, he started showing his personality in his works, getting closer to his readers.

The large poem Troilus and Criseyde consisted of five books and united the comic and tragic, trivial and heroic. Chaucer masterfully created his characters; his psychological observations were precise. The end of the poem brought moral teaching, according to the traditions of the English literature.

The Legend of Good Women is another big poem in the English language; it was decasyllabic. One can see the characters tortured by love from ancient times. Geoffrey’s guardian queen reproached him once: there was too much mockery of women in his texts, for instance, in The Romaunt of the Rose and Troilus and Criseyde. Thus, the new poem appeared.

The Canterbury Tales made Chaucer’s name immortal; many people associate the author’s name with this book. It portrays 29 pilgrims, who gather together in an inn not far from London; they are heading to Canterbury to the shrine of Saint Thomas Becket.

Each pilgrim tells a story to pass the time; they spend nights in inns, communicate with passers-by, scream, give compliments, and show rudeness. All in all, it is a moral and social novel with the characters illustrating the traditional English society.

At the end of his life, the father of the English literature created several poems notable for their sad spirits; Chaucer wanted to hide from crowds and asked the king for financial support, for his poverty was pressing. Geoffrey locked himself up in his thoughts and worries, but a silver lining came soon: his guardian provided him with a significant pension. The man could allow renting a wonderful house not far from Westminster Abbey.

The poet was happily married to Philippa Roet, the daughter of the knight Sir Gilles de Roet. The marriage became a significant variable for Chaucer; he was able to fulfill all his plans.

Geoffrey was not only a talented philosopher, writer, and poet, but also a wise astronomer. When his son Lewis was ten, he created a scientific treatise on the astrolabe.

Geoffrey Chaucer’s life was exciting and full of various activities. He died on October 25, 1400, in London; he was 57. The cause of death did not reach our days. The man was buried in Poets’ Corner, Westminster Abbey; there is the artist’s portrait on his stone grave.

And oft in tender vows her pity su’d.

The love of money is the root of evil.

For swich lawe as a man yeveth another wight,

For one thing, sirs, I dare say confidently,