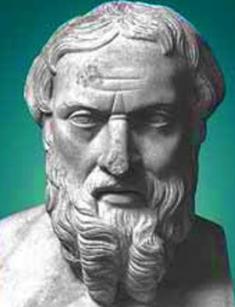 Herodotus is famous as the “father of history”; he created the first treatise The Histories that survived until the present days and described the traditions of the peoples living in the fifth century BC, as well as the events of the Greco-Persian Wars. Herodotus’s works were significant in the development of ancient culture.

The information about the researcher’s life comes from two sources: the encyclopedia Suda (the second half of the 10th century, Byzantium) and his own texts. Some facts contradict each other.

According to the common theory, Herodotus was born in 484 BC in Halicarnassus. The ancient city was located in the historical area of Caria, the coast of the Mediterranean Sea, Asia Minor. One of the major ancient Greek tribes, the Dorians, founded the settlement not far from the Carians, another Greek group.

The future historian was born into a powerful and wealthy family. As a young man, he participated in the political life and joined the party whose aim was to oust the tyrant Lygdamis; Herodotus was exiled and spent some time on the island of Samos.

Further on, the young man had many exciting travels: Egypt, Babylon, Asia Minor, Assyria, North Black Sea region, the Hellespont; he crossed the Balkans from Macedonia to Peloponnese. He did some sketches for his future masterpiece at this period.

At the age of 40, Herodotus settled in Athens. He read some parts of The Histories to the upper-class members, so modern researchers believe they had been written during the journeys. The historian met the supporters of Pericles, the military leader and orator, one of the founders of Athenian democracy. In 444 BC, the Greek colony Thurii was founded onsite of the destroyed city, Sybaris; he actively participated in the reconstruction.

Herodotus’s fundamental work The Histories contributed to science significantly. However, it is not a historical research – it is the narration of a curious, sociable, and talented man who had visited many places and accumulated pretty much knowledge on his contemporaries. The book embraces several components:

Overall, Herodotus’s manuscript consists of nine books; there are two parts there:

Herodotus paid much attention to twists of fate and gods’ envy to human happiness; he believed that gods interfered with the natural flow of events. At the same time, he admitted that personal traits of political leaders were the key to their success.

The researcher criticized Persian leaders for their impudence and the desire to change the existing order – the Persians must live in Asia while Europe was meant for the Hellene. In 500 BC, the Ionian Revolt occurred; Ancient Greece was involved in bloodshed. The author expressed his opinion: it was the manifestation of pride and extreme incaution.

The structure of Herodotus’s The Histories

This book is also known as The Muses – Alexandrian scientists named each part after a muse.

Herodotus not only gave his own memories and personal attitude but also included witnesses’ words, oracles’ notes, and lettering; he visited battle fields to present each event as it happened. The researcher supported Pericles and often praised his family’s achievements.

Although the author believed in dogs’ influence, and his approach was subjective and limited in terms of information, the book was not all about praising the Greeks and their fight for their freedom. Herodotus tried to understand the causes and effects of victories and losses. Thus, The Histories became a substantial milestone in the development of international historiography.

The historian’s success is explained not only by numerous facts about tribes and events – the man’s art of narration was excellent, and his text was similar to an epic work, exciting for both contemporaries and people of the modern times. The majority of facts Herodotus had described were proven archeologically later.

Only pieces of information about Herodotus’s life survived; it is impossible to say whether the scientist had a wife or children. The man was an inquisitive and communicable person who could get along well with various people and showed an amazing persistence when it was necessary to verify facts.

Herodotus presumably died in 425 BC; the location of his burial place is unknown.