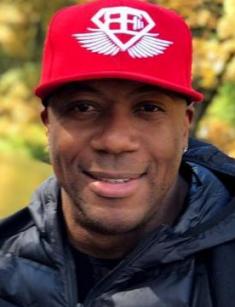 The road to fame and recognition is often difficult and thorny, and fame to some of today's celebrities comes at a reasonable age. The list includes the writer Joanne Rowling, the creator of the Marvel universe Stan Lee, actors Morgan Freeman and Harrison Ford. Shawn Rhoden, the sportsman who won the highest title in bodybuilding, when he turned 43 years and five months old, also confidently followed the list.

On April 2 of 1975, the future Mr. Olympia 2018 was born in the homeland of Bob Marley and Sean Paul - sunny Jamaica. However, since childhood, the boy loved football, dreaming of repeating the way of Pelé or Diego Maradona.

When the teenager turned 15, the head of the family, Lloyd decided to move to the U.S. and soon, along with his wife and four children ( Shawn has three brothers) settled in Maryland. In the new school, Shawn, in addition to his favorite game of football, got into the swimming section, not knowing that his enrolment because of a large number of pretty girls would lead first to the gym, and from there - in professional sports.

Rhoden's cousin, John Lancaster, insisted on regular training in the gym, suggesting that the constant exercise would contribute to the development of his body. Johnny Chamburger was the one who engaged him to start a bodybuilding career.

As for his biography, Shawn was known to be very attached to his father. For a while, he was detached from bodybuilding to help him cope with a long illness, but eventually, he couldn't bear his death and became addicted to alcohol.

The bodybuilder confessed that his father was his biggest fan. According to Shawn, he kept a videotape with his son's performances and showed it to his friends and everyone who came to their house. After his death, he drank more alcohol in six months than in his entire life, Rhoden remembered.

The man began serious bodybuilding in 1992, and it was very successful, as evidenced by his first victories at amateur tournaments. However, the following year, the young bodybuilder got into an accident, breaking his tendons. Doctors predicted the end of his career, but Shawn made every effort to ensure that their predictions would not be true. So, he won the championship in New Jersey. Bodybuilder Shawn Rhoden However, when only a few years had passed since the tragedy, fate once again threw up another challenge as a back injury. But, it seemed, nothing could stop Flexatron.

The nickname "Flexatron" came up by a friend impressed by his impressive muscles with the height of 5'10'' (178 cm), off-season weight of 260 lb (118 kg), and on-season weight of 240 lb (109 kg), and the biceps of 55 cm. However, in 2002, Shawn's father was diagnosed with an incurable disease, and he gave up sports for seven years. He returned for several reasons. Firstly, because he promised it to Lloyd, and secondly, alcohol abuse led to serious detoxification of the kidneys, liver, etc.

As a result, in 2009, Rhoden conquered the North American Championship and the NPC Delaware Open Bodybuilding. Two years later, he made his breakthrough into the Europa Supershow top three. In 2012, he won first prizes in four prestigious competitions. He tried to get into the cherished Mr. Olympia contest seven times (not including the European Mr. Olympia). He debuted in the 11th place and reached the cherished award in 2018, bypassing Phil Heath.

As for personal life, it is known that Rhoden has a long relationship with his beloved Michelle, who gave the man a daughter named Cora Capri on July 27, 2015.

After winning the Mr. Olympia competition, Shawn posted a photo of his family together on Instagram with a touching note:

For a moment, time stood still. To stand there and see the smile in my princesses eyes makes my heart rejoice with joy. We will forever share this moment. I thank you Jesus everyday for @michelle_sugarsb and her. They are my reason and my purpose.

In the summer of 2019, Rhoden was involved in a high-profile legal scandal. He was charged with the rape of a married woman on October 12, 2018. He was issued an arrest warrant on July 11, with a substantial amount of bail. He was also suspended from further appearances at Mr. Olympia. However, the fans were embarrassed that these unsightly facts the victim decided to disclose shortly before the next Mr. Olympia. The bodybuilder himself did not stand aside and posted a post on Instagram, where he claimed his innocence.