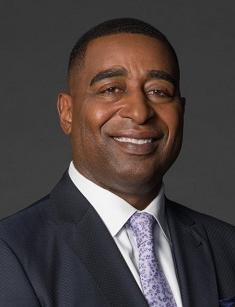 Graduel Christopher Darin Carter is a former football player in the NFL, a wide receiver exactly. His career as a player ended in 2002. For now, he hosts many TV shows and also works as a coach.

Christopher Carter was born in Ohio in 1965. He attended Heywood Elementary school there, and then he moved together with his mother, two sisters, and three brothers to Middletown, Ohio. There he studied at the Middletown High School and started playing both basketball and football. Christopher’s family was very big, and the apartment where they lived was small.

Carter was named as Graduel after his grandfather. On the ESPN Radio's Mike & Mike, the sportsman says that in the 7th grade, he decided he would never become famous with a name like Graduel, and so he unofficially changed his name to Cris.

During his high school time, Carter received the offer from Ohio State head coach Earle Bruce, and he agreed. Cris became the first All American wide receiver in Ohio State. Firstly, the young sportsman wanted to play both basketball and football but eventually decided to focus on football only. In 1985, at the Citrus Bowl, Cris caught a ball that was thrown by Jim Karsatos, who, in his turn, named this Carter's catch as the best in the whole college football history.

Right before his senior season, Carter signed a secret contract with a famous sports agent Norby Walters. When it was discovered, Cris was considered as ineligible. Despite this, he left Ohio State with his record for the receptions. In 2000, Carter was included in the Ohio State Football All-Century Team, and three years later, he was inducted into the hall of fame of The Ohio State University. By the way, Ohio State does not forget Cris: recently, in 2019, his old friend, Damon Arnette, a cornerback, had some strong thoughts about leaving his league, but Carter changed his mind, and everybody is grateful to him for this.

In 1987–1989, Cris was a part of the Philadelphia Eagles team. Last year, in 1989, he received the position of the main red zone receiver and led his team with 11 touchdown catches that took the 3rd place in the NFC. Shortly after that, Carter had a quarrel with the coach Buddy Ryan, and he was cut. Later, Cris admitted that this fight was because of his drug and alcohol abuse, so his coach literally saved his life and changed it.

Carter finished the campaign in 1990 with 27 receptions for 413 yards and three touchdowns as a member of The Minnesota Vikings. Next year, he became its top pass catcher. In the team, there were some changes: after a disappointing season, the head coach Jerry Burns was changed by Dennis Green, who started some "cleaning process."

In 1992, Carter was still the team's primary weapon leading it with 53 receptions, 681 yards, and 6 touchdowns, although he missed the final four games because of his broken collarbone. Next year was a breakout for Cris, and he posted new team highs.

In 1998, the Vikings got a new wide receiver – Randy Moss. That season, they scored a league record, 556 points. The team was led by Moss, Carter, and Randall Cunningham, and it went into the playoffs as heavy favorites. In 2001, Cris left the Vikings and joined Miami Dolphins next year. After the season and the period of losing, he retired.

After his retirement, Carter worked as the host of Inside the NFL by HBO and also launched his own sports training center called Cris Carter's FAST Program, it is situated in South Florida. One of his current jobs is a coach at St. Thomas Aquinas High School, where, by the way, his son Duron played as wide receiver in 2008.

In 2008, 2009, and 2014, Cris had a speech at the NFL Rookie Symposium. At the last one, he advised players to find a guy who could take the blame for something if they got in trouble. This speech was revealed next year, and it was accepted not happily by NFL. Carter later apologized on his Twitter page and admitted that he gave lousy advice for players. By the way, the former sportsman is a really active user of social pages, and some of his posts are controversial. In 2018, for instance, after the injury of Earl Thomas, a Seahawks member, Carter shamed him and encouraged to show some respect for the Seahawks. It turned out to be rather negative comment. Earl was not the only Seahawks guy who was commented by Cris. In 2014, right before Super Bowl XLVIII, Carter called Doug Baldwin an appetizer doubting his professional skills.

In 2016, Fox Sports hired Carter to work as a football analyst. Next year, he started co-hosting the show First Things First together with Nick Wright and Jenna Wolfe. According to the latest news, in November 2019, Cris finished his work on the TV show.

In 1990, Carter married Melanie Morgan, and she gave birth to their children: a son Duron who now plays for the BC Lions and daughter Monterae who is occupied in charitable work. Over 20 years passed, and the spouses got divorced. In 2018, Cris married Susanna Baumann. Carter met his second wife when they both worked at ESPN, and she was a make-up artist.

According to his stats, Carter was one of the three players with a record of over 12 receptions in back to back games. He is also a member of the Hall of Fame Class in 2013 and the first player who recorded a 150-yard receiving game in 3 various decades.