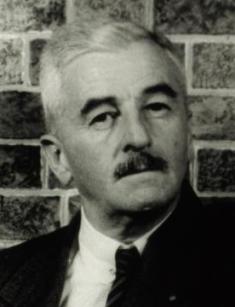 The American writer William Faulkner earned his fame as the creator of the novels The Sound and the Fury, Light in August, and The Reivers. He became the only Mississippi citizen who won the Nobel Prize in literature and Joseph Pulitzer’s prize for belle letters. Although the author’s books had not been popular before that, they were included in Modern Library’s 100 Best Novels.

William Cuthbert Faulkner was born on September 25, 1897, in New Albany, Mississippi, into the family of Murry Cuthbert and Maud Butler. The child took an interest in literature early and learned how to read and write before school.

The family moved several times and finally settled in Oxford, Lafayette. The father began to administer several businesses while the mother, the grandmother, and black nanny Callie kept the house and brought up the kids. The women’s influence on the future writer’s life was great: they instilled the love of art and rich language in the boy.

However, the father also contributed to his sons’ development: he taught them how to observe the beauty of the world while fishing, hunting, and walking in little-explored forests. Thus, the teenager succeeded academically as an elementary student, but he lost interest in the middle school and started playing truant.

At some moment, the history of Mississippi grabbed Faulkner’s attention; he dreamed of the same life as his famous great-grandfather had – he was a writer, colonel, and the hero of the Civil War. William’s friend Phil Stone, who was several years older and received his Bachelor’s degree at Yale University, shared his interests. Following the wise friend’s recommendation, the would-be author took up courses at the University of Mississippi and joined the brotherhood Sigma Alpha Epsilon.

The artistic organization encouraged its members to be creative; the 17-year-old man did not want to stand out and started writing poetry. Stone was the first reader of the young talents’ works and appreciated them; he addressed several publishers, who marked the texts unsuitable for publications.

Such an attitude made Faulkner reject literature for a while and enroll at a back-up unit of the Canadian air forces. Still, the First World War was over; the young man, who had not experienced any military activities, returned home. Thanks to his father’s protection, the retiree was accepted to the university again; although his academic performance was mediocre, William was invited to write for the students’ newspaper.

In 1919, The New Republic published Faulkner’s early work; the collection of poems The Marble Faun followed five years later. By that time, the beginning writer had quit poetry: the novelist Sherwood Anderson advised him to go to prose, and William took up the novels Soldiers’ Pay and Mosquitoes.

In 1927, the man planned a series of novels set in an imaginary Yoknapatawpha county and presented its first book, Flags in the Dust. Despite the great expectations, the story about the traditional South did not fancy editors; it was fully reconstructed in 1929 and released as Sartoris.

The writer felt empty because his book had been treated that way and decided to organize some artistic experiments. He created three short stories about the young generation of the Compson family; the events merged and made a full-fledged novel The Sound and the Fury. Faulkner’s linguistic and literary approach was innovatory. The first readers did not understand the message, though; the profound work was appreciated only in 1932.

Following the wave of success, William published a collection of short stories These Thirteen. “Rose for Emily”, “Red Leaves”, “That Evening Sun”, and “Dry September” pictured racial inequality and moral suppression spread in some parts of the country.

Contemporaries viewed the novel Light in August (1932) as the writer’s most popular book. Other famous novels include Absalom, Absalom!, Intruder in the Dust, The Town, and The Mansion; they made its creator the winner of the Nobel Prize in literature and became best “South” books of all times.

Despite many romances, William Faulkner’s heart belonged to his first love, Estelle Oldham, who became his wife in 1929.

The road to the happiness bumpy: the woman preferred another man at first. The writer waited for ten years for the revival of the relationship. Unfit for service, William went to the army because of Estelle and almost left literature, that eventually provided them with a comfortable life.

The artist relaxed only when he married Estelle, who left her first husband. The birth of the daughters Jill and Alabama brought much happiness and gave the strength to create. Thanks to the writer’s commercial success, the Faulkners purchased a house named Rowan Oak in Mississippi. Today, it holds the museum with a collection of books, manuscripts, portraits, and photos.

Faulkner was fond of riding and hunting since his childhood and did not stop his favorite activities until the senior age. One day, he fell from a horse and got injured; medical examination showed he had vascular occlusion and clots of blood, leading to thrombosis.

Perhaps, the diagnosis reduced the man’s strength and led to cardiac failure. William Faulkner died in 1962 at Wright’s Sanatorium; he was 64 years old.