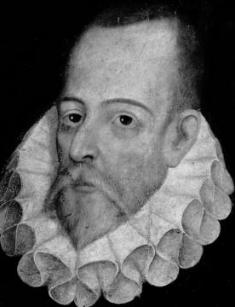 The story about Knight of the Rueful Countenance Don Quixote of La Mancha and his loyal squire Sancho Panza was born thanks to Miguel de Cervantes. Today, the parody tale of chivalry is a significant literary monument, but it brought pretty much trouble to its creator: the accusations of slander and even deathly threats.

Miguel de Cervantes was born on September 29, 1547, in Alcalá de Henares, Spain. On October 9 of the same year, the record was made in the church book of Santa María la Mayor:

“Miguel, son of Rodrigo Cervantes and his wife Leonor, was baptized; his godfather was Juan Pardo; he was baptized by the Reverend Bachelor Bartolomé Serrano, Priest of Our Lady”.

The writer’s name was Miguel de Cervantes Saavedra, but the boy did not receive it at birth. “Saavedra” was added later when he was an adult; it was probably a reference to the name of the Chilean commune, where the family came from.

Miguel’s father, Rodrigo, worked as a barber and simultaneously performed minor medical duties, such as bone-setting or blood-letting. The mother, Leonor de Cortinas, was a daughter of a bankrupt nobleman; she was sold into marriage in 1543.

Little Miguel often traveled across the country with his family. Later, he went to a Jesuit school for boys in Madrid – favorable words about the Roman-Catholic church in “The Dialogue of the Dogs” from Exemplary Novels is said to prove it. There is another theory: de Cervantes attended the University of Salamanca. Still, none of the versions is supported by solid evidence.

At the age of 22, Cervantes got involved in a street fight involuntarily; some Antonio de Sigura was wounded by him. The fear of arrest made Miguel leave his homeland. Friendly Italy welcomed the ambitious young talent. Cervantes discovered Renaissance painting, architecture, and poetry; experts saw references to the Italian folklore and parody on many national writers later.

In 1570, Miguel was accepted to Spanish Infantería de Marina and served in Naples, which belonged to Spain at that period. However, the young man participated in actual military operations only the next year: in September 1571, he went to the Gulf of Patras. On October 7, The Battle of Lepanto between the Holy League and the Ottoman Empire took place there.

When the battle started, de Cervantes had a fever; he was determined to fight at any cost and said he would rather die for his God and king than stay covered in his room. The future writer had three gunshot wounds: two in his chest and one in his left arm. The latter trauma actually made him one-armed. Miguel mentioned in his book La Galatea he

“had lost the movement of the left hand for the glory of the right”.

Recovery took six months. In 1572, the man returned to the army and stayed in Naples with occasional expeditions to the Corfu and Navarino islands; he witnessed the Battle of La Goulette occurred; the former capital of Tunisia fell, and so did the country.

In fall 1575, de Cervantes left Naples for Barcelona with recommendation letters for the Spanish king: the group commander praised the soldier’s achievements and asked to promote him. However, life interfered with people’s plans: corsairs took Miguel’s ship on September 26, in the morning.

The future writer and, reportedly, his brother Rodrigo were delivered to Algeria, the then center of the Ottoman Empire; they were captured. The man stayed in the country until 1580 and attempted to flee four times, unsuccessfully. The parents bought their sons’ freedom for a big sum of money; recommendation letters to the king made de Cervantes’s price higher.

This episode was reflected in the author’s books. A captive’s story in Don Quixote and the plays El trato de Argel (Life in Algiers) and Los baños de Argel (The Dungeons of Algiers) show some naturalistic moments that only an enslaved person could describe.

As long as Miguel returned home, he lived with his parents in Madrid. He had begun to write, but it was impossible to earn one’s living with literary activities only, just as it happened with many other authors of that time.

The man worked as a buying agent for the Spanish fleet in Andalusia: he looked for economically advantageous prices for butter, grain, and other products and then delivered the bought items to ships. One day, he left money with a banker, but the thievish partner spent it all. Thus, the writer was imprisoned for several months; perhaps, he conceived the basic idea of Don Quixote at that time.

Further on, Cervantes worked as a collector of taxes and accountant. In his last years, 1610-1616, the man received a king’s pension, which was enough to devote all the time to literature.

De Cervantes debuted as a writer at 38. His first book, La Galatea (1585), pertained to the classic genre, a pastoral novel. High circles ignored the text, and the author did not feel much excited about the “empty” idea.

Cervantes was a man with a wonderful sense of humor. When he was imprisoned, he decided to create a parody on tales of chivalry, popular in the 16th century. Miguel pictured an old whacko who read too many knight stories and began to wander the world, looking for adventures.

An antipode, a peasant Sancho Panza, accompanies noble Don Quixote in his journeys. Sancho is a simple and pragmatic man who wants to gain promised donkeys and an island. His primary job is to protect his master from danger and explain on time that windmills are not dragons.

The Spanish playwright Lope de Vega became the prototype for the crazy romantic. De Vega’s works were more popular than Cervantes’s books. When the poet got tired of writing autobiographical love stories, he set off on a journey around the world and abandoned his wife and children. Miguel not only created the greatest novel of the Golden Age but also mocked his opponent.

The novel came out in two parts: The Ingenious Gentleman Don Quixote of La Mancha (1605) and Don Quixote, Part Two (1615). The sequel was a necessity: in 1614, some Alonso Fernández de Avellaneda presented what he called the second part of Don Quixote; it was aimed against Cervantes.

The story became an integral part of international culture. Fyodor Dostoevsky characterized it as “the ultimate and most sublime work of human thinking”. The famous quote “The proof of the pudding is eating it” is taken from Don Quixote: it means that everything is tested by practice.

The writer wanted his novels to become something significant for the Spanish, just like Giovanni Boccaccio’s books were essential for the Italian. For this purpose, he created twelve stories of Exemplary Novels (1613). De Cervantes proves to be a humanist and gives his characters the right for freedom and happiness. They reach what they desire through torment, but it only makes the joy of their victory sweeter.

The novel The Travails of Persiles and Sigismunda (1617) is one of the last works by Miguel de Cervantes; it was released after his death. Perhaps, the author tried to mimic the ancient Greek writer Heliodorus.

There is little information about the writer’s personal life. He married on December 12, 1584, at the age of 37; the 19-year-old noblewoman Catalina de Salazar y Palacios became his wife. The dowry gave the opportunity to live comfortably for a while.

At this time, Cervantes had an out-of-wedlock child, the daughter Isabel de Saavedra; the actress Ana Franca de Rojas was her mother. The marriage to the young spouse did not last long and ended in the late 1580s.

The 68-year-old writer died in Madrid on April 22, 1616. Modern medics believe that cirrhosis and following type 2 diabetes caused death; it could explain an unquenchable thirst the man had in his last years.

According to Cervantes’s last will, he was buried at Convent of the Barefoot Trinitarians in the center of Madrid. In 1673, the place was reconstructed, and the poet’s remnants were moved to a safe place to be stored for a while. However, nobody could identify it when the time came – there were no identification signs on it.

In 2014, archeologists found a tomb with ten bodies; there were the initials inside one of the coffins: MS. Scientists had the writer’s portrait and used some proven information: thee gunshot wounds and the fact that the old man had only six teeth left. Thus, they concluded that it was, indeed, Miguel de Cervantes’s bones. On June 11, 2015, they were buried in the monastery with a tablet “Miguel de Cervantes Saavedra”.