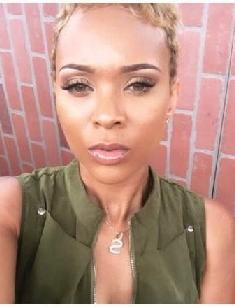 Sabrina Parr is an American lifestyle coach and fitness model. She gained recognition after starting the relationship with the basketball player, Lamar Odom. The couple got engaged in November 2019.

Sabrina Parr was born in 1987 in Ohio. Her family was not wealthy at all, so a young girl was looking for employment. Since childhood, she wanted to be an entrepreneur in the future. Parr shared some details of her growing up on her Instagram page recently.

Sabrina attended Collinwood High School, where she started doing sports and even received various awards, for instance, State Track Champion Award. Also, at her school, Parr worked as an assistant coach. Speaking about her further education, she did not attend any college.

Since her early years, Sabrina was interested in physical exercises and keeping her body in shape. So, thanks to her athletic experience, she decided to create a program for people who wanted a healthy lifestyle and a great body too. Sabrina called it "Getting up to Parr." On her website, the fitness guru offers everyone detox tea, diet, and workout plans. Besides, she provides personal training. By the way, since both Parr and her fiancé are occupied in the sports field, they also have the same manager, Zoul El Fassi. Sabrina’s net worth is estimated at approximately $500,000.

Sabrina’s fiancé, Lamar Odom, has some skeletons in his closet, including cheating on his then-wife, Khloe Kardashian, drug and alcohol abuse. However, Parr has her own past.

During the marriage to Antonio Davis, Sabrina made a mistake and cheated on him with some other guy. After Davis had found out about her infidelity, the spouses had an argument, and that led to domestic violence. Parr hit Antonio so bad that he had to receive seven stitches to his head. Sabrina was arrested on May 7, 2015, and found guilty by the court. She received a sentence of 180 days in jail and three years of probation.

On November 12, 2019, Sabrina proudly showed her beautiful diamond ring at the dinner at Miami Beach restaurant. Now, she is a fiancée of Lamar Odom, a professional basketball player, and Khloe Kardashian’s ex-husband. However, not everyone was happy about this case; for instance, Lamar's child, Lamar Odom Jr., said that it was a shame that no one in the family knew about this engagement. Sabrina's own children consider this relationship developing too fast, and maybe it is: only on July 29, 2019, the couple was spotted in Atlanta. But who knows, it can be true love, and people just do not want to lose their time?

Parr has two kids: one son from her previous marriage to Antonio Davis, and one daughter from another relationship. The family life with Davis did not go well because Sabrina cheated on her then-husband. The divorce was really hard for her and children, but now both her and Antonio have the possibility to see the kids. You can see their photos on Parr’s social pages.