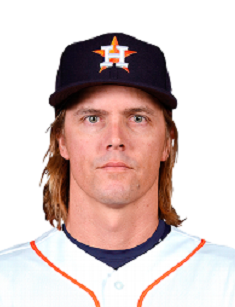 Zack Greinke is a superstar American sportsman who performs for the Houston Astros. The player has won many awards as a high school senior. He made his MLB debut in 2004. After missing the 2006 season while battling depression, the sportsman returned to baseball in the 2009 season. Although the player faced down a serious bout with anxiety that nearly ended his career, Zack never lost his love of baseball. He chose to battle with his problems and continue reaching high scores.

The sportsman was born in Orlando, Florida, USA. His father and mother have careers of teachers. The player has a younger brother, who also plays baseball: he was drafted by the New York Yankees in the 12th round of the 2008 MLB draft.

In youth, Zack had shown excellent results in tennis and golf competitions as well. In 1999, the young sportsman contributed to the win of the team he played in: it got the Senior League World Series title.

At the start of his career, Zack played as a shortstop. He performed as a relief pitcher as a sophomore and junior, and after that, he has become a starting pitcher. The sportsman impressed everybody with his skills and led his team to their third straight district title.

The player performed in six minor league games for the Royals farm teams in 2002. In 2003, he opened the season with Wilmington. He earned spots on the Carolina League mid-season and post-season all-star teams, as he was one of the best players in the team and amazed everyone with his game. Zack was later promoted to the AA Wichita Wranglers of the Texas League.

The sportsman remained one of the talented players and was called up to the major leagues in May, 2004. He debuted in a game against the Oakland Athletics. Later, he recorded his first career win against the Montreal Expos.

During the 2006 season, Zack had to leave the field. The sportsman admitted that he had social anxiety, which became a real problem for him. Later, the doctors confirmed his disease and advised the player to take a pause from sports. He agreed that the rest would only help him to feel better. He took his health seriously, as he had big plans for his future career.

In 2007, the athlete came back at the start of the season and performed very well during that year.

In January, 2009, he signed a four-year contract with the Royals and succeeded in winning many awards and titles.

Despite a productive and successful 2009 season, his performance in 2010 began to regress. Zack asked the Royals to trade him. The manager decided to trade him to the Milwaukee Brewers for some quality prospects.

The player was put on the disabled list at the start of the 2011 season because of the injury. After returning, Zack had several successful games. Despite his success with the Brewers in 2012, the team was struggling and not likely to make a playoff run. The manager of the team didn't want to lose such a great player as Zack, who improved the stats of the team. However, the team traded Zack to the Los Angeles Angels of Anaheim, and he made his first start for the Angels in July 2012, which was perfect.

In December, 2012, the sportsman agreed to a six-year free agent-contract with the Los Angeles Dodgers. Next year, he performed in his Dodgers jersey with #21 his 100th career win against the St. Louis Cardinals and was selected as National League Pitcher of the Month.

The 2014 season was full of great moments. Greinke performed in the All-Star Game, it was his second straight appearance. He was also chosen to be the starting pitcher for the National League squad.

At the end of 2015, the player had a six-year contract with the Arizona Diamondbacks. After performing in several matches, including games against Colorado Rockies, San Francisco Giants, and Chicago Cubs, the player was placed on the 15-day disabled list due to injury. In August, 2016, he recorded his 2000th career strikeout in the Diamondbacks' 10–9 win over Atlanta Braves. Next year, the sportsman was selected to the NL All-Star team. He won his fourth consecutive Rawlings Gold Glove Award after the 2017 season and was once again named an All-Star in 2018.

In July, 2019, after the trade rumors that spread all over the Internet, the Diamondbacks traded Zack to the Houston Astros. He played in Games 3 and 7 of the 2019 World Series for Houston, and then was replaced by Will Harris. Eventually, the Astros lost the game 6-2. According to Brooks Baseball, the team was hoping to end the ALDS game in Tampa Bay, but after a poor start from Greinke, the Astros were likely heading to a Game 4. However, the team's manager is sure that Zack has big potential. He said that Greinke is the guy who has been "really good for a really long time."

Speaking of the sportsman's playing style, Zack throws six different pitches: four-seam fastball, two-seam fastball, cutter, slider, curveball, changeup. He uses his two-seamer more often than against left-handed hitters. The professionals say that his slider has been one of his more effective pitches. Hitters have only a .154 batting average and .230 slugging percentage against the pitch. It has produced 51% of his strikeouts.

The player has been described as a "scientist as a pitcher"; he often prepares for each start more extensively than most.

Greinke is not single. He is married to a beautiful Emily Kuchar, who is a model. Zack met his wife when he was studying at the High School. Emily is a former cheerleader. In 2008, she also was Miss Daytona Beach USA . The couple has two sons: Bode Nicholas and Griffin.

The player keeps his relationships and personal information a secret, and he prefers not to share with media the details of his day to day life. The sportsman has an Instagram account, but he doesn't post personal photos. He has several pictures from the baseball matches; the player also expresses his gratitude via his account to everybody who supports him, including his fans.