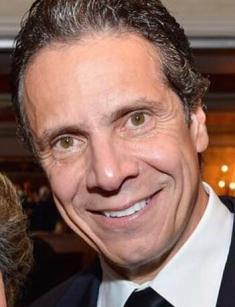 Born and raised in Queens, NY, Andrew Cuomo is better known for his political activities and for being the 56th governor of New York. Andrew was born on the 6th of December, 1957. He is of American nationality and mixed ethnicity. The faith he believes in is Catholicism.

Andrew Cuomo was the governor of New York from January 1st, 2011 till August 23rd, 2021, until he resigned. He chaired the National Governors Association and was its vice chair. Throughout his career, Andrew was the 64th Attorney General of NY, the 11th US Secretary of Housing and Urban Development, and the assistant secretary of housing and urban development, community planning, and development.

Andrew is from a New York borough named Queens. He was born into a political family: his dad is Mario Cuomo, who is an ex-governor of New York and a lawyer. Andrew's mom, Matilda Raffa, is an advocate for women and children. By the way, his family is of Italian descent. Andrew has four siblings, and some of them are Chris Cuomo, a CNN journalist, and Margaret Cuomo, a radiologist.

In his childhood, Andrew was educated at St. Gerard Majella School (1971), and Archbishop Molloy High School (1975). After completing his high school education, Andrew enrolled at Fordham University in 1979 and then, three years later, at Albany Law School. Andrew has a Bachelor of Arts and a Juris Doctor.

His political career started when Andrew was a campaign manager for his dad when he was governor of New York in 1982. Then Andrew tried himself as a policy advisor and sometimes Albany roommate. In 1993, Andrew was appointed as an assistant secretary for community planning and development in the Department of Housing and Urban Development. In 2010, Andrew won the governor's election and beat the opponent with a score of 62.6%. He was governor until 2022 when he left the seat. Throughout his career, Andrew has made a big contribution to New York: he legalized same-sex marriage, edited the tax code, and passed a law on women's equality. However, Andrew was criticized in many ways. For example, he was accused of corruption and concealment of real data on patients with COVID-19 in nursing homes.

Andrew was removed from the post of governor of New York because he was accused of sexual harassment. Lindsey Boylan was the first to talk about this, but then the governor's administration denied these statements. But then Charlotte Bennett, Ana Liss, and other women started talking about it. Andrew kissed them and touched them in every possible way, different parts of the body. As a result, on August 28, he resigned, and on January 31, the fifth and final court case against Cuomo, brought by Virginia Limmiatis, was dismissed by the New York District Attorney. All charges were dropped.

As of October 2022, Andrew Cuomo is single. For his entire life, Andrew was married twice. His first spouse was Kerry Kennedy. He married her in 1990, but then, in 2005, they divorced. He and Kerry have three daughters: Michaela, Mariah, and Cara Kennedy-Cuomo. From 2005 until 2019, Andrew had a domestic partner whose name is Sandra Lee.