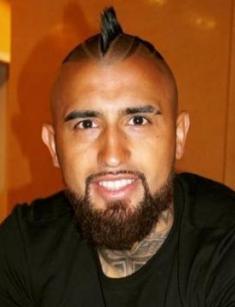 Chilean midfielder Arturo Vidal, nicknamed King Arthur and The Warrior, became famous for his tenacious and aggressive style of play at Juventus, Bayern Munich, and Barcelona. Starting his career with the South American team Colo-Colo, he won 3 Primera top division titles. And after a series of gold medals in Europe, he was named one of the best midfielders in the world. He repeatedly participated in America's Cup and the UEFA Champions League finals.

Arturo Vidal, whose full name is Arturo Erasmo Vidal Pardo, was born in the Chilean capital of Santiago on May 22, 1987. Together with three brothers, he was brought up by the owner of the vegetable shop Erasmo and his wife, housewife Jacqueline.

The father was not a good family man and, once in a state of intoxication, almost burned down a small room where the mother was sleeping with four children. This case led to the parents' divorce and forced 9-year-old Arturo to work in the stables. In his spare time, he was on the street and playing football with other boys. At one point, when the situation became complicated, the teenager decided to use his talent and physical abilities to save his family from a miserable existence, becoming a highly paid professional player. His mother allowed him to go to training every day, and Arturo disappeared all day long on the field, located near the house, and from the age of 11 began to study at the amateur club.

Then, with the help of his uncle, who worked as a mechanic, Vidal joined Colo-Colo, where he began to play sports seriously and get a salary of $ 50 per month. These funds were enough to pay for utilities, and the young man honestly worked them out, instead of 2 times a week going to the stadium every day. Hugo González, the coach in charge of training the youth team, noted Arturo, who was appointed as a midfielder, began an individual program that included a strict workout regime, equipment, running, and protein.

In 2006, Vidal, as a member of the Colo-Colo team, took part in professional competitions for the first time and became the Chilean champion three times. An excellent performance for the national team at South America's Cup and the bronze medals of the world championship of juniors in 2007 helped the young midfielder to move to Europe and make the first steps towards success and recognition.

The beginning of the triumphal march through the famous and eminent clubs was the signing of a contract with Rudolf Völler and the transfer to the main team of Bayer Leverkusen, based in the German city of the same name. The size of the transfer, which amounted to $ 11 million, was a record for the Chilean team and exceeded the amount that the Spanish club Villarreal CF had previously given for his trainee Matías Fernández.

In 2007, the newcomer to the former silver medalist of the Bundesliga began the season with an injury. But after he was cured, he made his debut in the game against Hamburg, and after three matches, he opened the score. The following year, Vidal became a regular member of the main team and played an essential role in the breakthrough in the cup semifinal.

In 2010-2011, Arturo continued to show results and became the best member of the team in the number of accurate passes and goal passes. As a result, Bayer Leverkusen took 2nd place in the German championship. The Chilean midfielder attracted the competitors and for some time, was negotiating with Bavaria Munich. However, the management of one of the most titled German clubs did not get the player's consent.

He signed a 5-year contract with the Italians and was enrolled in the legendary Juventus. In a match with no less titled team from Parma, Vidal appeared on the field for the first time, taking the place of Alessandro Del Piero. After 6 minutes of breakthroughs and pressing, he opened a goalscoring account. Looking at this, the coach, who initially thought that the midfielder would fight for a place in the base with a club member Claudio Marchisio, reviewed the tactical scheme and found work for both players.

In the following years, the Chilean became one of the key members of the team. He had dozens of assists and spectacular goals on his account. However, the most significant achievement of that time, he considered the hat-trick in the Champions League match against FC Copenhagen and four titles of the winner of the Italian championship, supplemented by the personal title Player of the Year with the inclusion of a symbolic team of Series A.

At the end of the contract, Vidal, who retained his original citizenship, was summoned to the location of the national team of Chile. In addition to the achievements, he won America's Cup in 2015 and 2016. Then the biography of the sportsman was again connected with Germany, and he played for two seasons for Bayern Munich, which he had been interested in for a long time.

There, the midfielder, wearing a T-shirt with number 23, continued to support the image of one of the best forwards in Europe and reached the semifinals of the Champions League, winning the German Cup and two gold medals of the Bundesliga.

This result did not slip away from the attention of the Spanish Club. After long negotiations with the management of the German club in 2018, Barcelona announced the signing of an agreement with Bayern Munich. At the request of the parties, the amount of Vidal's annual fee in the new club remained undisclosed, but the press learned that Joseph Bartomeu had to pay about € 20 million for the transfer.

In August, Arturo made his debut in La Liga with Seville, and in October, he scored his first and, as it turned out, not the only goal.

Having gone the hard way from poverty to popularity, Arturo couldn't help but be tempted by the temptations of young stars in Europe. The soccer player made a hairstyle for which he would have been kicked out of the team as a child, and covered the figure with a height of 5'11 (180 cm) and weight of 165 lbs (75 kg) with tattoos, which were incomprehensible to fellow citizens and initially irritating to his brothers and mother.

However, the family reconciled with the image of Arturo, especially after he had arranged his personal life, marrying the fair-haired beauty Maria Teresa Matus and became the father of sons Alonso and Emiliano and daughter Elizabeth.

However, his behavior outside the family left much to be desired and resulted in aggression not only on the field but also in everyday life. So, during the Copa América midfielder had an accident and crashed an expensive Ferrari car on one of the streets of Santiago, not far from the capital's casino. The police, who arrived at the scene, recorded the fact of alcohol consumption, and eventually, Vidal received a 2-year ban on driving in return for permission to continue playing.

However, this did not moderate the passion of the hot Chilean guy, and he continued to look for trouble, one of which in 2017 was a fight in a nightclub, due to the lack of security footage left without fines and penalties.

On July 6, 2019, Vidal again played for Chile at the CONMEBOL America Cup and scored the team's only goal against the Argentine goalkeeper with a penalty kick.

Now he is resting from the games and preparing for the beginning of the new season in Spain in the company of a girl who recently became known to fans who actively use the Instagram social network. In May, the photo of Arturo embraced by the hot beauty appeared on the page of the fitness model Sonia Isaza and caused questions about the marital loyalty and data search on the topic of whether there was a divorce.

Arturo Vidal has a net worth of $16 million.