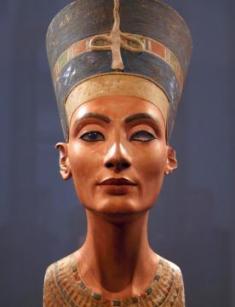 Legends about the beauty of Nefertiti, the wife of Pharaoh Akhenaten, are retold by lovers of Egyptian history for hundreds of years. The ambitious girl, whose past is shrouded in mystery, became the proclaimed co-ruler of the state and helped her husband to introduce a new religion into the country. Looking at the photo taken from the preserved bust, it is safe to say that the phrase "The Beautiful Woman has Come" (the literal translation of the name of the Queen) is genuinely deserved.

The place where Nefertiti was born is unknown. The approximate date of birth of the ruler is 1370 BC. There is no evidence that the future Queen was born in Egypt. A standard version says that the girl came to the country of the God Ra in 12 years. It is possible that the real name of Nefertiti was Tadukhipa. The child was born in Mesopotamia in the family of the king of Taruta. To establish relations with the Pharaoh, Nefertiti was sent to Egypt as a gift.

It is possible that the true father of Nefertiti was Amenhotep III, and the mother of beauty was a concubine of the harem, in which the little girl would later settle herself. Some Egyptologists believe that her parent was a holder of the Egyptian throne, Ay. Alas, none of the proposed theories has sufficient evidence.

By the time the girl finally matured, the ruling Pharaoh died. A chance acquaintance with the ruler's son Akhenaten (also known as Amenhotep IV) radically changed the biography of the beauty. Instead of the painful death that awaited all the inhabitants of the harem of the deceased Lord, Nefertiti took the place of the "main wife " of the new ruler of Egypt.

The girl, who was barely 16 years old, made a sensible decision not to contradict the revolutionary thoughts of her husband. Having ascended the throne, Amenhotep IV proclaimed the era of a new religion. In place of many gods came Aten, the only God of the Sun.

By joint decision, the couple moved the capital of the state to the city of Akhenaten. Support of her spouse's initiatives bore fruit. Pharaoh declared his wife a co-ruler; obtaining power, Nefertiti did not hide in the chambers of the Palace anymore. Nefertiti, along with her husband, received political figures, went to ceremonies, and personally held events celebrating the new God.

The end of the quiet rule came after the death of one of the daughters of the spouses. Perhaps Akhenaten first thought about the continuation of his kind, so the inability of his wife to give birth to an heir cooled the ardor of the Pharaoh.

Nefertiti lost power and left the Palace for several years. Not wanting to live out her life in obscurity, the beauty took on the functions of the educator of the baby Tutankhamun, the only heir of the husband and son of the second wife of the Pharaoh. Nefertiti, approaching the throne again, found opportunities to influence her husband's decisions, but this time she did it secretly.

Egyptologists claim that after the death of Amenhotep IV, Nefertiti took the throne and declared herself Pharaoh by selecting the name Smenkhkare. Two years later, when Tutankhamun reached adulthood, the Queen voluntarily left the Board. Such a theory is not supported by enough evidence to be considered historically correct.

The first spouse of the young beauty was Amenhotep III. However, the marriage union had a nominal meaning. Nefertiti was a member of the harem of the reigning Pharaoh and hardly met her husband, spending time with other concubines. After the death of Amenhotep III, the future ruler of Egypt was threatened with death. According to the centuries-old tradition, Pharaoh's concubines were buried together with the deceased.

Nefertiti was freed by Akhenaten, the son of Amenhotep III. It is not known where the young man saw the girl, but captivated by her beauty and grace, he married Nefertiti, thereby saving her from death. A burning passion united Pharaoh and Nefertiti.

Nefertiti gave birth to six daughters, and this marked the beginning of problems in marriage. Wishing to continue the family with the help of an heir, Akhenaten banished his wife to the province. However, the ruler of Egypt soon became tired of his new wife, even though she bore him a son. Nefertiti returned home and did not part with her lover until the day of his death.

Egyptologists say that the Queen died at the age of 30-40. This is the only information that researchers say confidently. The mummy of Nefertiti has not been found, so it is impossible to establish the cause of death of the beloved of Akhenaten.

There is a theory that, after the death of the Pharaoh, the priests, dissatisfied with the new order, conspired and killed the Queen. According to another version of scientists, a more likely cause of death of Nefertiti was an unknown disease that the doctors did not notice in time. The woman died at Thebes.

The burial place of influential beauty is unknown. For 20 years, archaeologists periodically make loud statements that they found the tomb of the Queen, but a thorough check did not confirm the authenticity of the findings.

In 2015, based on investigations by Egyptologist Carl Nicholas Reeves, archaeologists claimed that Nefertiti's body was hidden in a secret room located in Tutankhamun's tomb. But because there was a fierce debate about whether to break the wall that hid a possible grave, they never reached a consensus, and nothing happened.