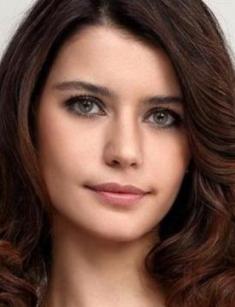 Beren Saat is a young Turkish actress who has won international recognition since taking the lead in the project Forbidden Love. In the historical drama, Rhino Season Beren starred along with Italian star Monica Bellucci. Beren Saat was born in February 1984 in the capital of Turkey. In Ankara, she spent childhood and teen years. Beren' s parents are not connected with the art world in any way. Her father is a professional sportsman, and her mother is a teacher. The family brought up two children - the oldest son, Cem, born in 1979, and Beren, the youngest daughter. Already in early childhood, the girl began to show artistry. Beren sang well. The parents took her daughter to music school, where the vocals of the young singer reached perfection.

Soon, Beren Saat received dozens of awards and prizes for participation in various music contests. One day, young Beren took part in a competition of young talents, where the girl was awarded 2nd place as a novice actress. Then Saat thought about her acting career for the first time.

The future actress received higher education in the capital university. She chose management as her major. However, the girl did not forget about her dream of becoming an actress.

An extensive cinematic biography of Beren Saat began with an episodic role in the adventure melodrama. There is Death in Our Love. The actress brilliantly played the heroine Nermin, which opened the way to the movies.

The famous Turkish producer Tomris Giritlioglu, who was looking for a suitable candidate for the leading role in the new project Love in Exile, noticed and appreciated the novice actress. Beren Saat gladly agreed to play the heroine Zilan, because Giritlioglu's movies instantly made all its participants celebrities.

The audience immediately noted the increased skill of Beren, who appeared in the image of a romantic beauty Zilan, the bride of Khazar. They are married without their will. The newlyweds need time to love each other.

The third one, Remember Darling, followed the first TV shows. The series takes place at the end of the 1950s. The character of Beren falls in love with a young man Ahmet (Cansel Elcin), who falls in love with her too. For a long time, the lovers have not been able to unite, as their families are in enmity with each other. Then the actress's repertoire was replenished with works in the series European Side and full-length film called Pains of Autumn.

Beren Saat was able to consolidate and increase the success of the next picture. It was a melodrama Forbidden Love, where the artist starred with already recognized stars of Turkish cinema Kivanç Tatlitug, Nebahat Çehre, Nur Fettahoğlu, and IIlker Kizmaz. Beren' s heroine named Bihter conquered the audience. Saat was able to demonstrate her high mastery of transformation and her ability to masterly depict all shades of feeling. For this work, the young actress received a prestigious national award, Golden Butterfly. The tape was shown in 20 countries around the world and brought the artist's popularity to the international level.

It seems that with each new project, the talent of the actress manifested itself brighter and brighter. In 2010, Saat's filmography was supplemented with work in a melodrama that conquered hundreds of thousands of compatriots, What is Fatmagül's fault? The leading role of Fatmagül went to Beren. The series was so successful that the rights to broadcast melodrama bought dozens of countries. For this work, the artist received a total of 14 awards.

An unforgettable experience for Beren was working as a voice actress. The voice of the artist in the animated movie Toy Story 3, you can hear from Barbie. The cartoon was released in Turkey in 2010. In the American version of the character duplicated Jodi Benson. Later, Saat voiced the characters of the cartoons Brave and Minions.

It is no wonder that in 2013, Saat received an invitation to star in the multi-part drama Rhino Season mentioned at the beginning of the article. The filming took place not only in Turkey but also in Iran and Iraq.

In May 2016, Beren Saat was awarded the highest title of Arab cinematography - Best Actress of the Murex D'or version. This award is only given to the most popular and successful actors in the Arab world. The award ceremony took place in the Lebanese capital of Beirut.

Some new viewers got acquainted with this Turkish actress after the broadcast of the series Magnificent Century: Kösem. In December 2015, Saat started working on the image of the main character - Kösem. But the actress worked in the project for a short time: in the middle of 2016, Beren said that she was canceling the contract.

Close attention of the press to the person of a talented artist is chained from the first appearance on the screens. Besides, the personal life of Beren Saat is full of events, so that the name of the beauty rarely comes down from the first pages of the tabloids. But no matter how many relationships in the life of Beren, the young woman claims that the greatest love of her life was a guy named Efe. The lover, according to Saat, encouraged Beren to act. Efe tragically died in a car accident.

But life went on, and Beren Saat was dating her colleague Bülent İnal. The young people lived together for three years, but in 2009 they broke up. After the affair with İnal followed another one - with the famous director Levent Semerci, who filmed the series What is Fatmagül's fault? with the participation of Saat.

It is noteworthy that the couple broke up immediately after the release of the tape on the screens. The press began to talk about the flashed on the set of the novel between Beren Saat and Engin Akyürek, which allegedly caused the break-up of the actress and director. But it seems that these are only rumors provoked by the perfectly played "film-loving" couple.

In July 2014, it became known that Beren Saat married Kenan Doğulu, a famous Turkish performer. The wedding took place in Los Angeles. Soon in a network, there was a photo of the beauty with a rounded tummy. Fans assumed that the actress was pregnant. Beren herself denied the rumors. Besides, she soon began to work on a role in the series Magnificent Century: Kösem.

But six months later, the young woman left the project. As Saat claimed, it was connected with the desire to carry a child. According to information from the Turkish media, the couple went to the U.S. Clinic of Reproductive Medicine to perform IVF procedures.

Beren Saat, who dreams of having her own child, is fond of children. On the profile of the actress on Instagram, there are occasionally photos with young children: nephews and nieces of Saat and her husband.

In February 2017, the People of the Year Award was presented to the Turkish edition of GQ Men's magazine for 2016. Actress Beren Saat, the winner of the 2013 award, was invited as a guest who presented the prize to Ozan Açiktan in the category "Director of the Year." The woman came on stage in a gorgeous evening dress of malachite shade with a deep neckline, which impressed everyone present. The popular designer Ozgur Masur created the outfit for Beren.

In 2017, Beren Saat took a break in her creative activity. The woman did not appear in the movies. Therefore, no premiere with the participation of a star is expected in the near future. At the beginning of 2018, Turkish tabloids started talking about the artist's pregnancy again. Apparently, the previous attempt to carry a child was unsuccessful, so now the couple has taken another one.